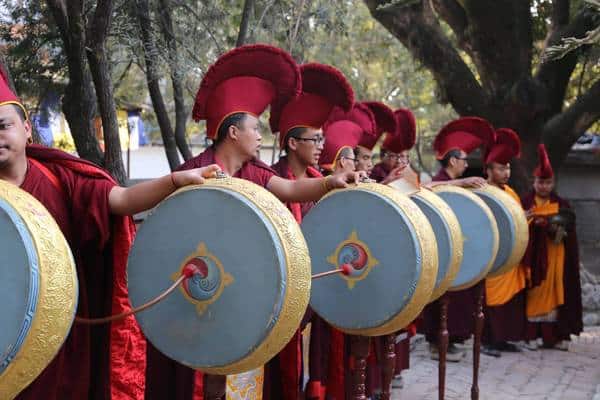 Tibetan ritual music makes a major impression on newcomers to Tibetan Buddhist pūjās. People are often surprised and impressed by the dramatic and sometimes deafening sounds of ritual music. Monastic group chanting is known as yangröl (dbyangs rol).  We should understand that this music is not merely entertainment, but is itself a form of offering  or chöpa (mchod pa).

Yangröl, or rölmo refers to the combination of ritual chants and music. Chants are accompanied by a variety of specialized instruments. Specialists learn to play the instruments so that their offerings are considered both pleasant to the ear—nyenpa (snyan pa)—and skillfully—khépa (mkhas pa)—performed. 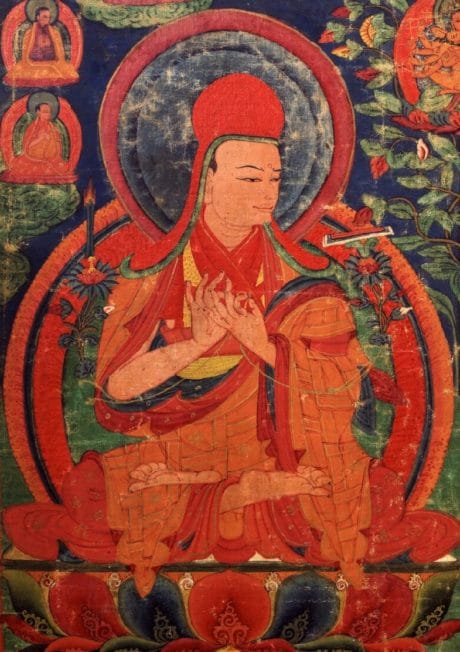 Sakya Pandita had studied intensively the monastic curriculum of the great Indian monasteries. Thus, he became an important figure in bringing the Indian system of five major and five minor sciences, including music, to Tibet. His work, Treatise on Music (rol mo’i bstan bcos) was a valuable contribution to the understanding of this science.

Traditionally, it is said that these musical instruments derived from the meditative visions of high lamas. When highly realized persons perform visualizations involving various deities, they can be actually transported to the realms of those particular deities. Having observed retinues of gods bearing offerings, including musical instruments, to the deities, these lamas were then able to describe and order the crafting of replicas. Similarly, the musical tones produced are not aimed at human ears, but as expressions of ultimate truths realized through meditation.

This word means “music” in general, but also refers specifically to hemispherical brass cymbals. These may also be known by the name buk chöl (sbug-chol) or bup chal (sbub-chal). These cymbals feature large central knobs with thin leather handles strung through a hole in the center.

The rölmo provide rhythm and structure to the group chants.  They are played horizontally by striking their faces together in a tri-part method that includes an initial stroke, an accelerating pulse and a concluding resonating hum. 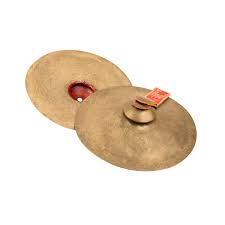 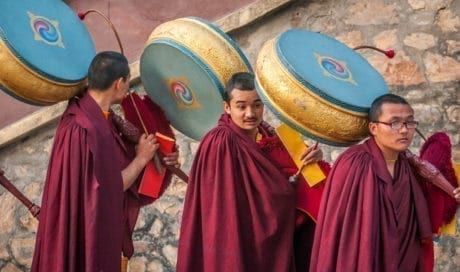 Refers to any ritual drum or percussion instrument.

This type of drum refers specifically to those that are held by the player. The double headed drum attaches to some sort of handle or frame.  The player usually holds the handle by the left hand and strikes the center with a sickle shaped drumstick. 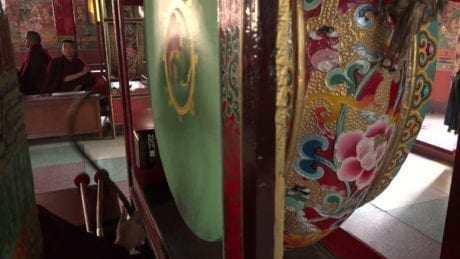 These large, deeply resounding drums are mounted on square frames and played usually with one or two short, straight sticks. They are often used to mark the time during group practice. 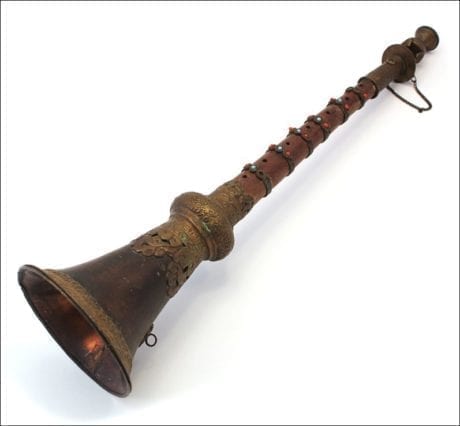 We can literally translate the name of this instrument as “Indian trumpet.”  It is a reed instrument, somewhat similar to an oboe.  The player passes  air down the reed through a cylindrical tube. Gyalings are often used during peaceful offerings and are the only instruments that are played using discrete pitches as opposed to slurred melodies.

Kang lings are another type of wind instrument. These ancient instruments, of Indian origin, were historically crafted from a human thighbone. This ‘thighbone trumpet’ is often used in rituals concerning wrathful deities. A blast of this trumpet produces a piercing, bright tone. These days they are often made of precious metals instead of human or animal bones. 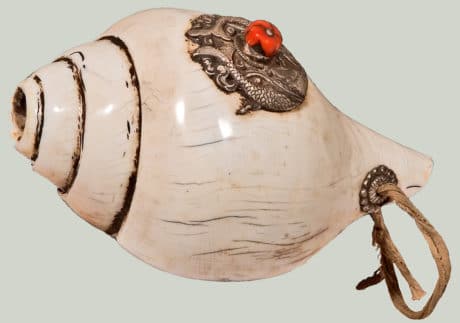 Conch shell trumpets produce a warmer, deeper tone than the gya ling.  During ritual practice, the players may alternate the sound of the two instruments, which produces an almost unbroken sound at two levels of tonality.  White conch trumpets are primarily played during peaceful deity practices. Dung kars are also used to announce the arrival of important figures or to call monks to assemble for ritual. 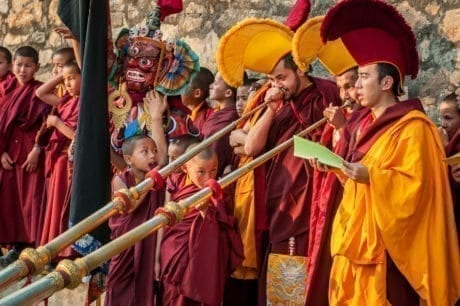 The most remarkable instrument in Tibetan ritual music is the long trumpet. This instrument is played by passing air through pressed lips down a long slightly flaring tube. It is probably the best-known instrument due to its deep, low and quite resonant sound. It may remind observers of long Alpen horns.

Generally, they are dark in color and decorated with elegant scrolled metalwork and engravings. Most dung chen are made of three telescoping sections. Thus, they can be more easily transported into the shrine hall or onto the roof of monasteries. Customarily these impressive instruments are played to welcome high lamas and Rinpoches to a monastery or temple. When played inside the temple, the players usually prop the dung chen up onto a small wooden frame. During outdoor processions or festivals, two or three assistants may help the musician carry them.

Forgetting the Goal: A Lesson on Hope and Despair

Anxiety: Seeing Through the Spin