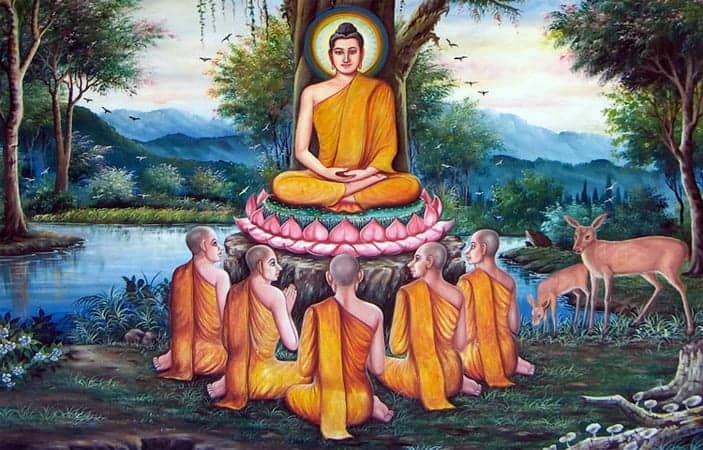 This auspicious day is a 1oo-million merit multiplying opportunity. So, please take advantage of this auspicious time to practice well! You can join together with your sangha family, support the sangha and its activities through generosity, and show compassion to all sentient beings without exception. We can all join in making offerings and also in making pure aspirations for the Dharma to continue to flourish!

On the auspicious day of Chökhor Düchen, we remember the first turning of the Dharma Wheel. As followers of the Buddha, we joyfully recall this major event. Also, we take time to reflect upon these teachings and rejoice in the merit of enlightened activity.

Thus, Buddhist followers celebrate this day with practice and reflection. And many pilgrims visit the Isipatana site at Sarnath in India to reflect on this occasion.

We may wish to give special thanks for the Triple Gem, The Buddha, The Dharma, and the Sangha, as we rejoice in the support of the sangha, which was established when the Buddha taught his first followers on this occasion.

Even if we are far away, we can also celebrate by gathering together to practice the dharma, make offerings, and contemplate the teachings of the Buddha. And we can joyfully recite and remember teachings on the four noble truths and the eightfold path. Moreover, reading Dharma passages is a wonderful way to celebrate this important day!

The symbol of the wheel derives from ancient India. There, the wheel symbolized the wheel of the universal emperor who established righteous dominion. 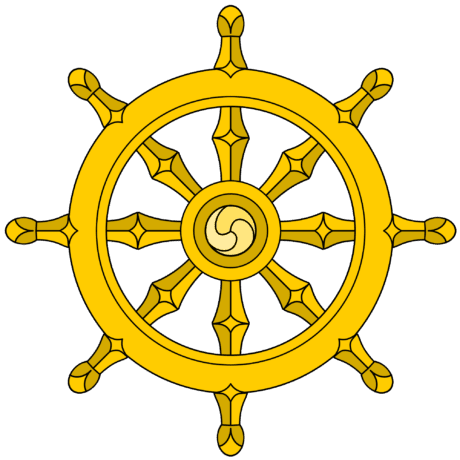 Later, the wheel became one of the eight auspicious symbols of Buddhism. As you can read below, some texts state that the gods offered the Buddha the wheel after he manifested enlightenment. Additionally, the eight spokes of the Dharma wheel represent the eight-fold path.

The Buddha declared the path to be The Middle Way because it was free from the two extremes of austerities and of over-indulgence. Additionally, this path results in seeing four truths about how things truly are:

The great Sakya master Butön Rinchen Drup (1290–1364), in his History of Buddhism in India and Tibet (bu ston chos ‘byung) describes the scene in great detail. After his awakening, the Buddha remained silent for a period of 49 days and did not immediately teach. However, the gods Brahma and Lord of the Devas Śakra, implored him to instruct beings. After this request, the Buddha then determined that he would first teach to his five former ascetic companions at Sarnath near Benares.

The Teacher washed his body and thought, “Where shall I turn the wheel
of the doctrine?” In that place appeared one thousand thrones, decorated
with the seven treasures of a universal monarch. The Teacher circumambulated
the first three and then, as he seated himself upon the fourth, a
light illuminated the entire three-thousandfold-universe, made the earth
tremble, and purified all sentient beings. The gods offered him a thousand-spoked
wheel of gold and beseeched him to turn the teachings’ wheel.

O Monks, renunciants do not enter these two extremes—the
extremes of indulgence in desire or of exhausting hardship. Having
abandoned both extremes, transcendent buddhas teach the
doctrine in the middle way in this manner: the noble eightfold
path.

O Monks, these are the four truths: suffering, its origin, its
cessation, and the path.

And,
I fully understood suffering. I abandoned its sources.

And so on he spoke, repeating the four noble truths three times, thus turning
the teachings’ wheel in twelve aspects. Kaundinya thereby attained the
level of arhat: the three jewels came into being.

Thus, with twelve aspects,
He fully turned the teachings’ wheel.
Kaundinya achieved omniscience
And the three jewels manifestly came into being.

History of Buddhism in India and Tibet, p. 161.

Traditionally, Buddhists refer to this teaching as the “first turning of the wheel of Dharma”. The teaching is preserved in many languages. In Sanskrit, we know the text as the Dharmacakrapravartana-sūtra. And in Tibetan the text is preserved as the chos kyi ‘khor lo’i mdo ‘gyur byang med pa.

How to Become Radically Happy: A Teaching by Tulku Migmar