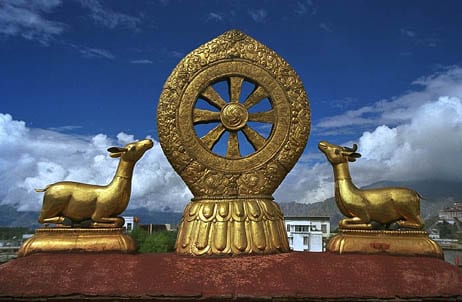 On the auspicious day of the Chökhor Düchen Festival,  we remember the Buddha’s first teaching. Traditionally, we refer to that event with the expression of the “first turning of the Dharma Wheel”. The symbol of the wheel derives from ancient India.  There, the wheel symbolized the wheel of the universal emperor who established righteous dominion.  Later the wheel became one of the eight auspicious symbols of Buddhism.

Some texts say that the gods offered the Buddha the wheel after he manifested enlightenment.  Additionally, the eight spokes of the Dharma wheel represent the eight-fold path.

The Buddha Travels to Teach

As followers of the Buddha, we joyfully recall the beginning of his long teaching career.  Also, we take time to reflect upon these teachings and rejoice in the merit of enlightened activity. Traditional texts explain that after the Buddha realized awakening beneath the Bodhi tree at Bodh Gaya, he spent seven weeks there engaged in a series of contemplations.  At first, he was reluctant to teach, fearing that people would not understand his message.  But, according to the written accounts, the gods Indra and Brahmā persuaded him to share his discovery of truth.  But the Buddha took the time to seek the appropriate audience for his message. He journeyed to the Deer Park at Isipatana. We now know the site as Sarnath, and it sits about 8 kilometers from Varanasi in northern India.  And there he turned the wheel of the Dharma for the group of five companions with whom he had previously practiced austerities. 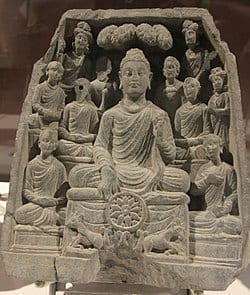 These days we preserve this first Dharma teaching as:

The Buddha declared the path to be The Middle Way because it was free from the two extremes of austerities and of over-indulgence.  Additionally, this path results in seeing four truths about how things truly are. We call them truths because they accurately describe our situation. But they are truths for the noble ones because we do not all see this. Only “noble ones” who have experienced some level of awakening see things accurately.

Please find here a link to video teachings by His Holiness the 14th Dalai Lama on the Four Truths.

Phakchok Rinpoche often points out that when the Buddha taught these points he was explaining basic human questions that we all struggle to answer.

The Dharmachakra and the Eightfold Path.

Furthermore, this teaching includes important instructions on how to practice the path. We call this the Eightfold Path of the Noble Ones.

We summarize this eightfold path as the practice of

On the momentous occasion of this teaching,  the earth quaked and a miraculous illuminating light filled all the realms. Then, the gods of all the various realms proclaimed praises. Finally, they announced the “setting in motion the Dharma wheel that cannot be stopped by anyone”.

Traditionally, Buddhist followers celebrate Chökhor Düchen Festival with practice and reflection.  Thus, many pilgrims visit the Isipatana site in India to contemplate the four truths and to practice meditation on this occasion.  But, even if we are far away, or are unable to travel due to the current world situation, we can also celebrate. We can do this by gathering in virtual sangha gathering spaces to practice the dharma, make offerings, and contemplate the teachings of the Buddha.  And we can joyfully recite and remember teachings on the four noble truths and the eightfold path. Reading Dharma passages is a wonderful way to celebrate this important day!

This auspicious day is 1oo-million merit multiplying opportunity.   So, please take the time to practice well!  You can join together with your sangha family, support the sangha and its activities through generosity, and show compassion to all sentient beings without exception. We can all participate by making offerings and also in making pure aspirations for the Dharma to continue to flourish!

Our activities are wide-ranging and we rely on support from generous sponsors. We invite you to create an auspicious connection by joining our growing group of patrons and making a regular monthly offering to make the Dharma available to all!

Student Reflections on Gomde Cooperstown’s Virtual Retreats – May 23 to June 1, 2020