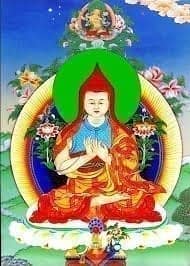 Ju Mipham Rinpoche or Jamgön Mipham Gyatso — a great Nyingma master and writer of the last century, student of Jamgön Kongtrul, Jamyang Khyentsé Wangpo and Patrul Rinpoche. Blessed by Mañjuśrī, he became one of the greatest scholars of his time. His collected works fill more than thirty volumes. His chief disciple was Shechen Gyaltsab Pema Namgyal.