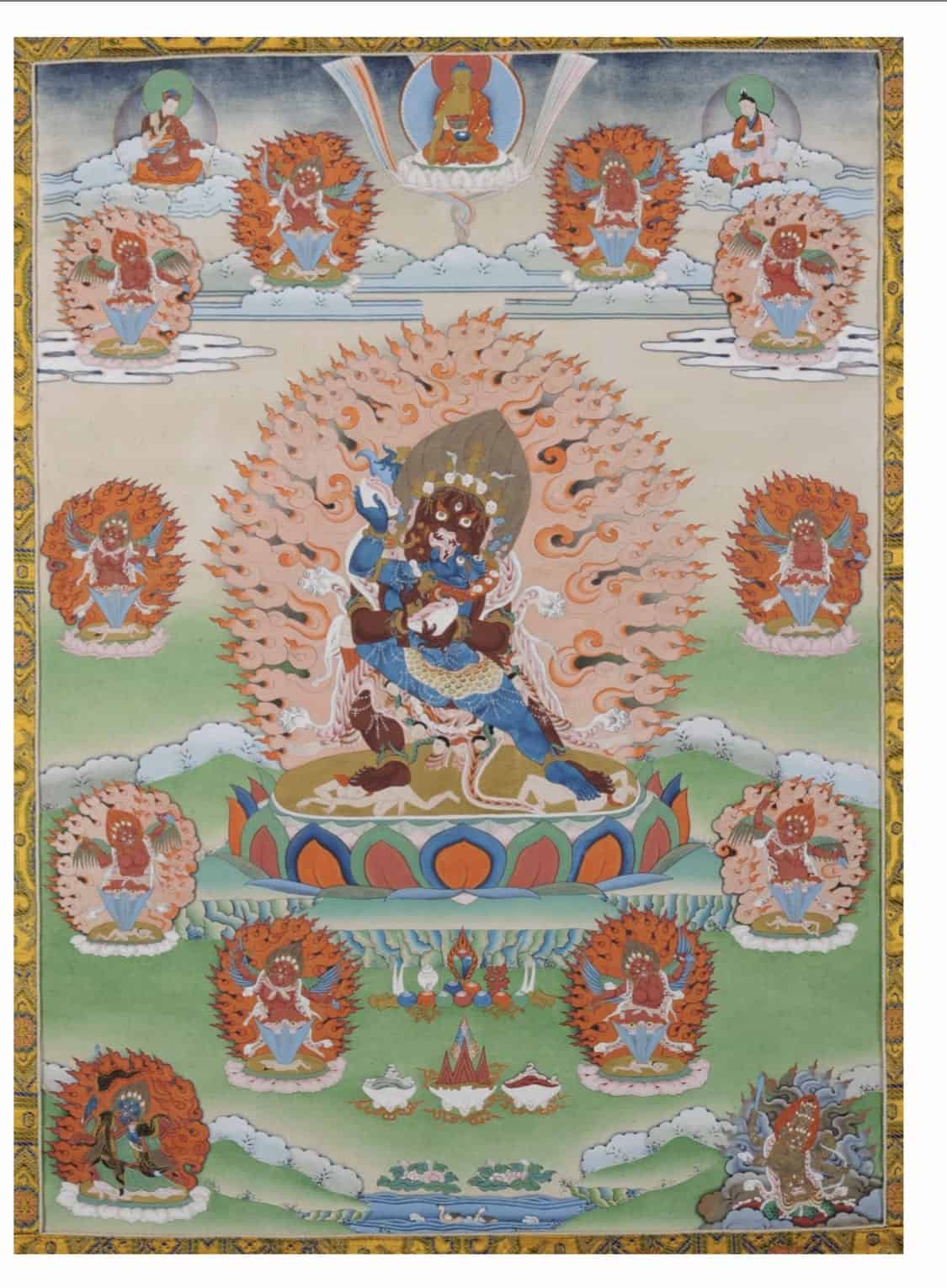 The annual 3-day Sidok Raksha Thötreng Puja is generally meant to promote harmony and world peace, and to dispel all negativity and obstacles before the start of the last lunar month before Tibetan New Year, or Losar, which this year falls on February 12, 2021.

Extracted from the Tukdrub Barche Kunsel cycle of the New Revealed Treasures of Chokgyur Lingpa (Chokling Tersar), the Raksha Tötreng puja accomplishes the wrathful manifestation of Guru Rinpoche, Padmasambhava, who was instrumental in transmitting and establishing Vajrayana Buddhism in Tibet. When Guru Rinpoche left Tibet, he skillfully manifested as the king of the rakshasa or yaksha cannibals (sri) in the southwestern continent called Ngayab Ling in Tibetan. He did this in order to prevent a prophecy that the rakshasa would invade the southern continent of India, Nepal and Tibet in the human world and cause great destruction. Thus, he gained the name Raksha Tötreng, the 11th of the Twelve Manifestations of Guru Rinpoche described in the Thukdrub Barche Kunsel.

The Puja will include a morning and afternoon session daily, beginning at 8:30am on Sunday January 10 and concluding daily at approximately 5:00pm. In normal years, visitors are most welcome to sit comfortably in the main temple, either as observers or as active participants in the puja. However, due to coronavirus precautions, visitors are limited in number this year, and may join by request at the monastery office.

At approximately 3:00pm on Tuesday, January 12, a special ceremony will be performed as the climax of the puja. The entire assembly of lamas, druplas, monks and nuns circumambulate the monastery. The procession will gather in a field behind the monastery where a wrathful effigy cake made of roasted barley flour (tsampa), embodying negative energy – all obstacles and negative circumstances – will be ritually burned. The burning of the effigy is a time when all the participants make aspirations that all the obstacles for sentient beings be removed just as the effigy disappears in the flames. Just prior to the burning, one may offer a traditional white scarf (katak) to the shrine master, along with a small offering to establish an auspicious connection by sharing in the merit of the practice, along with a wish that, through the destruction of the effigy, all harmful obstacles will be removed for sentient beings everywhere so that all may enjoy peace, happiness, and the attainment of complete enlightenment.

As the Barche Lamsel (Dispelling Obstacles on the Path) supplication prayer states about Raksha Tötreng:

According to Phakchok Rinpoche, the benefit of practicing the Raksha Tötreng repelling practice is to overcome conditions that cause us to die before our time, which prevent us from being able to benefit beings to our utmost capacity, and achieve liberation. This practice removes death-related obstacles, as Guru Rinpoche himself overcame the obstacle of death and still remains subduing the cannibals in the southwestern continent out of his compassion, preventing them from causing more negative deeds which would continue their lower rebirths.

Raksha Tötreng is described in the Great Accomplishment of the Guru’s Heart Practice, Dispeller of All Obstacles (Tukdrub Barche Kunsel Drupchen) text as being,

Dark brown and magnificent,
Holding vajra and blood-filled skull, he wears a tiger skin skirt.
Adorned with bone ornaments, and a bandoleer of skulls,
Blazing Blue Light embraces him holding a knife and a skull.
With his hair streaming upwards, adorned with glowing dry skulls,
He is vividly present as the form that subjugates samaya corrupters.

You can read more about Raksha Tötreng in Samye Institute’s series on the 12 Manifestations of Guru Rinpoche.

Note: due to coronavirus pandemic precautions, the crowd size of this year’s puja may be limited.