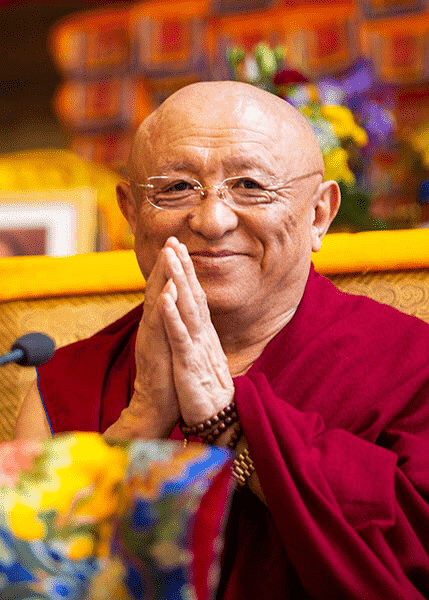 Chokyi Nyima Rinpoche is a world-renowned teacher and meditation master in the Kagyu and Nyingma traditions of Tibetan Buddhism. He was born in Tibet in 1951 as the oldest son of his mother Kunsang Dechen, a devoted Buddhist practitioner, and his father Tulku Urgyen Rinpoche, an accomplished master of Buddhist meditation. As a young child, Chokyi Nyima—“Sun of the Dharma”—was recognized as the 7th incarnation of the Tibetan meditation master Gar Drubchen.

In 1959, following the Chinese occupation of Tibet, Rinpoche’s family fled to India where Rinpoche spent his youth studying under some of Tibetan Buddhism’s most illustrious masters, such as His Holiness the 16th Gyalwang Karmapa, Kyabje Dilgo Khyentse Rinpoche, His Holiness Dudjom Rinpoche, Khunu Lama Tenzin Gyaltsen, and his father, Kyabje Tulku Urgyen Rinpoche.

In 1974, Rinpoche left India to join his parents in Kathmandu, Nepal, where he assisted them in establishing Ka-Nying Shedrub Ling Monastery. Upon its completion in 1976, H.H. the Karmapa enthroned Chokyi Nyima Rinpoche as the monastery’s abbot. To this day, Ka-Nying Shedrub Ling remains the heart of Rinpoche’s ever-growing mandala of activity.