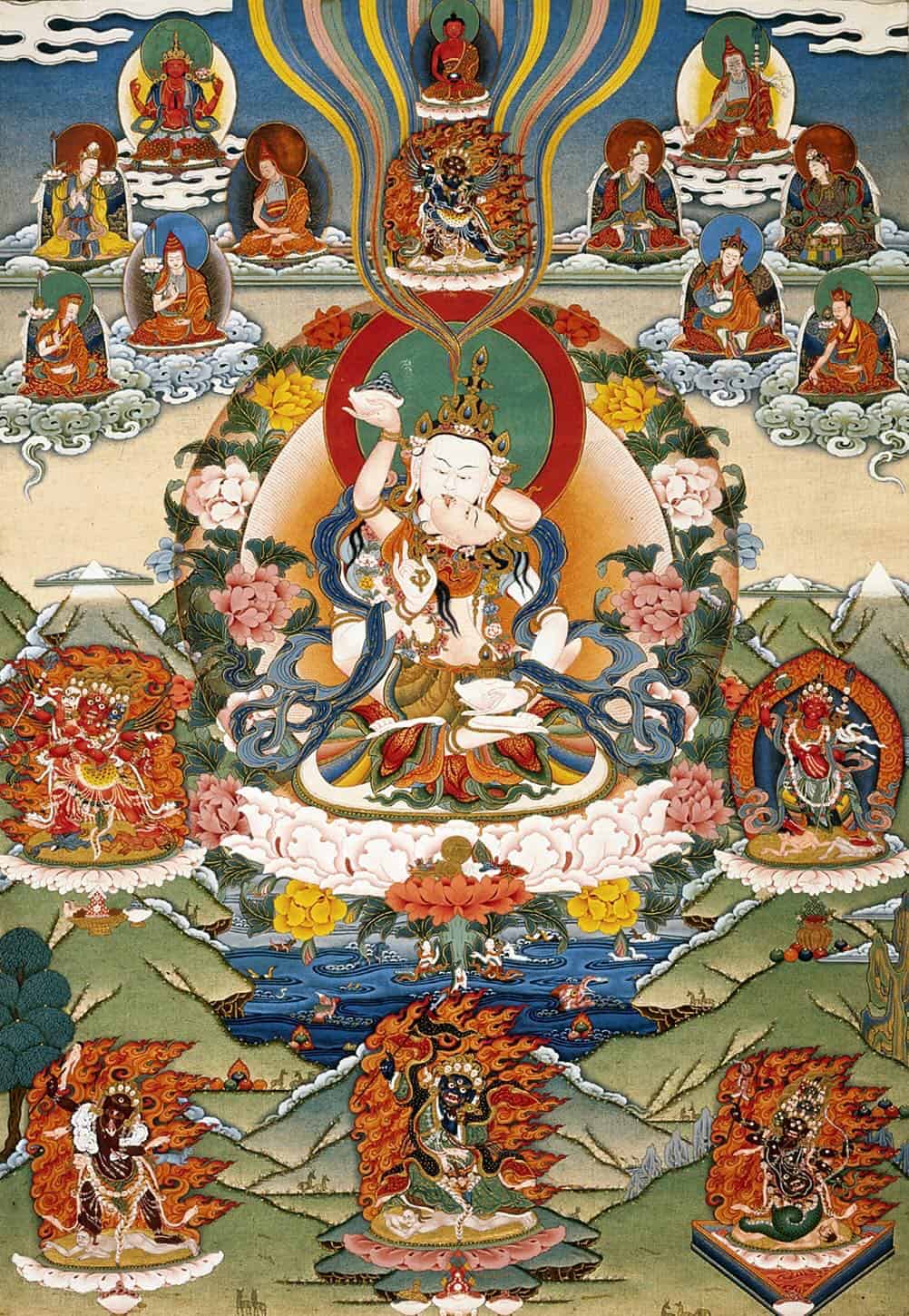 For the previous Tsok Bum—the accumulation of 100,000 Feast Offerings—of Tukdrup Barché Künsel, we shared with you a short introduction to Guru Rinpoche, Chokgyur Dechen Lingpa, Tukdrup Barché Künsel, the Feast Offering, and the sacred site of Asura Cave. Furthermore, we also shared a teaching by Phakchok Rinpoche on how to direct your practice. If you wish to review these materials, please click the links below:

The Benefits of Tsok Offering Practice

How to Direct Your Practice

Register and pledge the malas you will accumulate on Zoom

Zoom registration is required for everyone, regardless of whether or not you will join the Zoom meeting. Please follow these steps for registering, pledging the number of malas of recitations, and attending Zoom:

At the same time that we are practicing via Zoom, we will be live-streaming aspects of the Samye Zoom meeting via YouTube.

The full practice text is available on the Lhasey Lotsawa website here:

Please note that this text has been recently updated so be sure to download the latest version.

Jamyang Khyentse was born in 1820 in the region of Yaru Khyungchen Drak in Dilgo in Derge, East Tibet. His father was Rinchen Namgyal and his mother Sönam Tso. Jamyang Khyentse learnt to read at the age of four or five, and from an early age his intelligence grew so keen he was able to master reading, writing, and other skills without any difficulty. At twelve, he was recognized as the incarnation of the great khenpo of Evam Tharpatse, Jampa Namkha Chime, and he was given the name Jamyang Khyentse Wangpo. At age twenty-one, he received full ordination. In all, he had more than one hundred and fifty teachers, who were great masters from all four major schools—Sakya, Gelug, Kagyü and Nyingma. He studied with masters from every authentic tradition of practice with an unbroken lineage which existed at that time in the Land of Snows. He received these teachings in their entirety and in the proper way, imbibing all the ripening empowerments, liberating instructions, and supporting reading transmissions. Not only did he come to possess infinite learning, he also developed unsurpassable qualities of experience and realization through perfecting the practice of meditation. In time, his fame spread throughout Tibet and the name of Pema Ösal Dongak Lingpa, “holder of the seven special transmissions (ka bab dün),” was heard everywhere like claps of thunder resounding through the land. All that he himself had received of the sutras, tantras, and pith instructions, he passed onto his disciples in accordance with their own inclinations and karmic fortune. By continuously giving empowerments, transmissions, and teachings, he ensured that his followers were thoroughly grounded in the complete non-sectarian teachings of the Buddha and established many on the path of maturation and liberation. Bringing to an end such vast and magnificent deeds, he demonstrated passing into nirvana in 1892, the second month of the Water Dragon year. 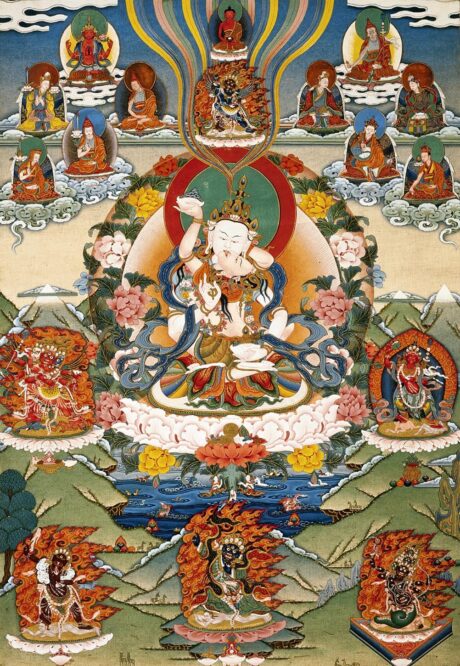 Jamgön Kongtrul, in his commentary on the above quoted root verses of Lamrim Yeshé Nyingpo, explains the significance of Guru Tsokyé Nyingtik as follows:

“Secretly, the means is the indivisible unity of primordially pure space and spontaneously present awareness, which itself is the basic nature of your own mind and all phenomena. The meaning of this is manifest in mudra form as the great Padma Vajradhara, Tsokyé Dorjé Chang, the symbol, who is all Three Roots condensed into one. He is the self-existing wheel of great bliss, and through his profound path of the essence yoga of undivided development and completion, you reach ‘accomplishment’ of unchanging co-emergent wisdom….”

Jamyang Khyentsé Wangpo then continued his journey and arrived at Samyé monastery on the Full Moon of the ninth month. He made vast offerings to the treasure statue of Guru Tsokyé Dorjé (Lake-Born Vajra Guru) revealed by the Great Tertön Nyangrel Nyingma Özer. As he was practicing, he had a vision of the statue becoming alive and granting him the empowerment and further instructions, finally to dissolve into his heart. The cycle’s auxiliary teachings also vividly arose in his realized experience, and he placed them under a seal of secrecy. The following winter, upon his fervent request, Chokgyur Dechen Lingpa received the Guru Tsokyé Nyingtik empowerment and instructions from Khyentsé Wangpo. That night, Chokgyur Dechen Lingpa had an extraordinary dream in which Guru Rinpoche empowered him as the custodian of these teachings. Through these blessings, Chokgyur Lingpa also revealed further related treasures from Sengchen Namdrak. Later, once he had completed the approach and accomplishment for the practice, at the occasion of a feast gathering on the tenth day of the month, his realization manifested as he hung up his damaru and bell in the air so that all those around could see. With these extraordinary signs of blessings, the Guru Tsokyé Nyingtik became the third of the four guru sadhanas common to the two great tertöns.

The initial quotation of the Lamrim Yeshé Nyingpo root text comes from:

The quotation of Jamgön Kongtrul in his commentary comes from: