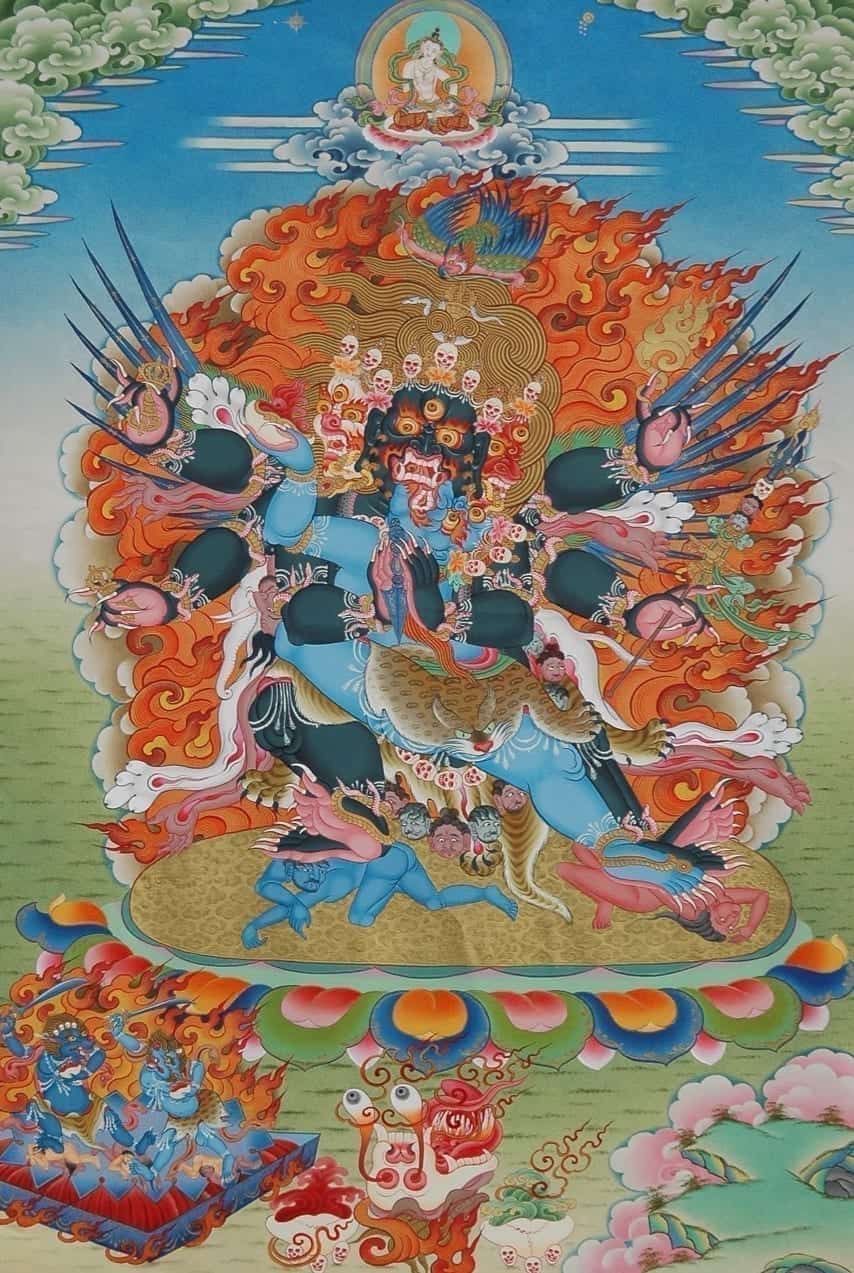 We are joyfully announcing a series of 100,000 ganachakra feast offerings (or: tsok bum) that will be completed at the sacred site of the Asura cave, where Guru Rinpoche attained the siddhi of Mahamudra.

Tsok is a profound Vajrayana practice of offering that swiftly gathers the accumulations of merit and wisdom and simultaneously purifies our obscurations. Bum means that the offering will be accumulated 100,000 times.

Phakchok Rinpoche will commence each gathering offering from the main shrine room at Asura Cave along with the three-year retreatants, who are practicing there. The feast offerings will be arranged directly in front of Guru Rinpoche’s practice cave. Simultaneously monks, nuns, and lay practitioners in Nepal, Tibet, and Bhutan will participate in.

So that everyone who wishes can practice together in this great vajra net of accumulating merit, the gathering offerings will be video-streamed live via YouTube. We invite everyone to participate in this chain of mantra resounding throughout the globe.

Register and pledge the malas you will accumulate on Zoom

Zoom registration is required for everyone, regardless of whether or not you will join the Zoom meeting. Please follow these steps for registering, pledging the number of malas of recitations, and attending Zoom:

At the same time that we are practicing via Zoom, we will be live-streaming aspects of the Samye Zoom meeting via YouTube.

The full practice text for the upcoming tsok bum of Vajrakīlaya is available on the Lhasey Lotsawa website here:

Vajrakilaya, the wrathful form of Vajrasattva, is the yidam deity who embodies the awakened activity of all buddhas and whose practice is famous for being the most powerful for removing obstacles, destroying forces hostile to compassion, and purifying the spiritual pollution so prevalent in this age.

This event, as told in the biographies of Guru Padmasambhava, begins with the Mahaguru directing his intention toward the supreme realization of mahamudra. In searching for a suitable retreat place, the Mahaguru traveled to Nepal where he met his destined consort, Belmo Shakyadevi, in a charnel ground below the Swayambhu Stupa. They continued south to the rocky caves of Pharping. Here Guru Rinpoché first opened the mandala of Yangdak Heruka with Shakyadevi beside him, and so they began their retreat.

No sooner had Guru Padmasambhava settled down to practice with his consort than they were beset by powerful demons. These forces plunged the whole country into a state of famine, plague, and chaos. For three years, these forces put a stop to the rains, so that famine, disease, and suffering spread like wildfire throughout India, Nepal, and Tibet, killing humans and livestock alike. These were desperate times for the region, and indeed it is often said that the more profound the practice, the more menacing the obstacles.

With havoc spreading all around, the Mahaguru decided to call upon his Indian gurus for remedial measures. He dispatched two Newar heart disciples—Jinamitra of Swayambhu and Lady Kunla Kunsashi—to Nalanda, in India, to ask for practices to counteract the virulent work of the demons. In their quest, they finally reached one of the Mahaguru’s own gurus, the vidyadhara Prabhahasti, and he gifted the two messengers the precious volumes they sought. The Newar disciples hastened back, laden with tantras and commentaries on Vajrakilaya, the deity that embodies the Buddha’s enlightened activity. The mere physical presence of these texts approaching ever closer had an immediate effect, instantly quelling the demonic tide that was sweeping through the land. All the proper conditions were finally in place: a destined spiritual consort, the ideal set of practices, and the perfectly chosen place. For three weeks, the Mahaguru and Belmo Shakyadevi practiced in Asura Cave. Together they invoked Vajrakilaya, thereby eradicating all obstacles to the accomplishment of mahamudra.

A rain of kila daggers fell from the sky, some still visible to this day as black kila rock formations around the caves, and realization was won. The terrors that had plagued the land were instantly transformed into the most delightful situations: timely rains, bountiful harvests, healthy animals, and healthy people. It is said, “When you are able to remove all obstacles, there remains no doubt that all siddhis will come.” Indeed, Guru Padmasambhava had attained his highest level of realization yet.

Later, Guru Rinpoché was joined at Yangleshö by the Kashmiri pandit Vimalamitra and the Newar yogi King Shilamanju. Once each of them had attained signs of accomplishment in their practice of Vajrakilaya, these three masters discussed and compiled all the Vajrakilaya teachings they had received, principally from the teachers Indrabhuti, Dhanasamskrita, Shri Singha, and Prabhahasti. The three masters accordingly revised and systematized the teachings on Vajrakilaya.

In the Barché Lamsel prayer, we find praise for Guru Rinpoché as the Pandita of Yangleshö. This is the Mahaguru as Mawé Sengé, Lion of Speech, indivisible from Manjushri, invoked in recognition of his extraordinary feats of composition that occurred here at Yangleshö.

Henceforth, Guru Padmasambhava used the practice of Vajrakilaya to bring down troublesome spirits and bind them to his command, not only here at Yangleshö and Asura, but elsewhere throughout Nepal, India, and Tibet.

The Sangtik Phurba practice belongs to the treasure teachings hidden by Guru Padmasambhava for future disciples. In the late summer of 1859, at the retreat hermitage of Jamgön Kongtrul Rinpoche at the sacred site of Tsadra Rinchen Drak in Tibet, Chokgyur Dechen Lingpa revealed the practice of Sangtik Phurba as part of the three inner secret essence cycles of Vajrasattva, Yangdak Heruka, and Vajrakilaya together with sacred treasure substances. Among the Vajrakilaya revelations of Chokgyur Lingpa, Sangtik Phurba is considered the highest or Atiyoga practice of Vajrakilaya. Because it is very effective in remove obstacles, contains great blessings, yet is easy to practice, it became the main yidam for all the Choklings.

The narrative of Guru Rinpoche’s accomplishment of Vajrakilaya comes from:

More information about the practice of Vajrakilaya can be found, here: