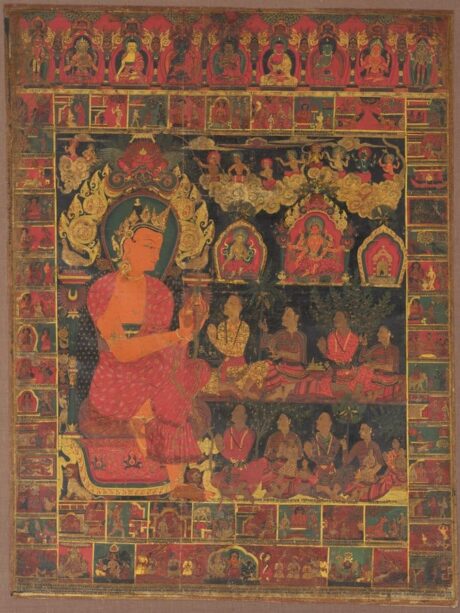 Bhagavān or Bhagavān Buddha appears throughout Buddhist scriptures as one of the many epithets, or titles for the Buddha.  When early Tibetan translators worked with their Indian counterparts to develop a lexicon, they chose the translation bcom ldan ‘dad, phonetically rendered as chom den dé.  In Tibetan texts, each of these names  teaches us something about the qualities of the Buddha.  In this way, when we recite the names of the Buddha (for example in the Treasury of Blessings practice), we recall those qualities as we call out the names.

Often we see translations of this term in English as either “Lord” or “The Blessed One” or even “Blessed Lord” depending upon context.  These translations reflect the Sanskrit and Pali etymology based on the word bhaga, meaning wealth or fortune.  Bhagavān in Indian usage designated a deity, who was “blessed” with fortune, wisdom, power, and might.  Thus, in Indian literature, this term is not exclusive to any particular deity, but conveys a sense of a superior being.

When we examine the Tibetan translation, we find a slightly different interpretation.  The early translators chose to emphasize an additional aspect which gives the term a slightly different meaning.  First, we begin with the syllable bcom (chom).  This word means to conquer, overcome or vanquish.  Thus, the Buddha is one who has conquered.  According to commentaries, in this case, we recall that the Buddha has overcome the four māras or four demons .

We can understand these demons to mean the obstacles that practitioners encounter.  According to Mahayana doctrine, only a fully enlightened buddha has completely vanquished these four demons.  The enumeration differs between the Sutrayana and the Vajrayana explanation.  However, in both cases, we should realize that these obstacles arise in the mind of the individual and have no true existence.  As the Buddha awakened and perfected his wisdom, he overcame or completely vanquished these obstacles.  He became a conqueror.

Next, the second syllable of the Tibetan reads ldan (den).  We often see this  syllable as part of Tibetan words; it means “to be endowed with”, or “possessing”.  And in this case, a buddha possesses six fortunes or qualities which also correspond to the five wisdoms.  Therefore, a buddha is blessed or fortunate.  In his commentary on the Heart Sutra, the Dzogchen lineage master Śrī Siṃha (dpal gyi seng ge)  enumerates the six fortunes or skal ba drug  (kalwa druk): 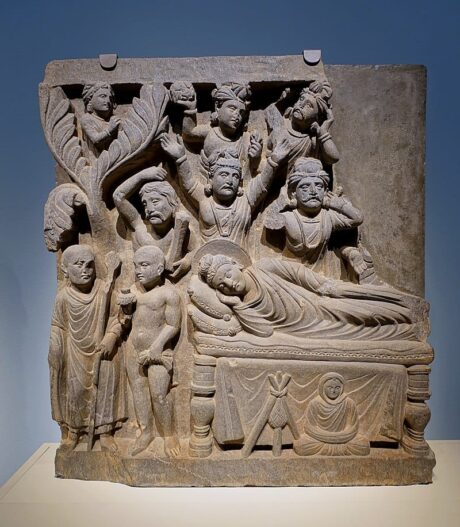 Finally, the last syllable in the Tibetan is ‘das (dé).  Jñānamitra, in his commentary on the Heart Sutra, asserted that the syllable vat (van) in Sanskrit referred to non-abiding nirvana.  Thus, from the full term, we can understand that the Buddha has conquered the obstacles, possesses fortunes and ultimate wisdom, and has passed beyond both extremes–that of cyclic existence but also of nirvana, or peace.  Therefore, when we read the Tibetan term, we understand that the Buddha is not only merely a “Blessed One”, but is a transcendent victor endowed with qualities.

Foe Destroyer, Arhat–What Is in a Name?