Self-Liberation in the Bardo of Dying 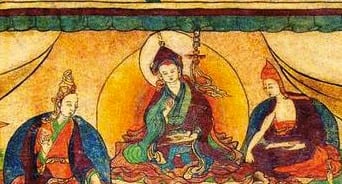 I hope you and your loved ones have been happy and healthy. I am at the moment in a small Malaysian city of Batu Pahat leading a Mahamudra retreat. And all is well here! For today’s Guru Rinpoche Day, I thought of extracting few pith instructions by Padmasambhava to his close student, Trisong Detsen and a brief overview of how it all started.

How Padmakara came to the Snowy Land of Tibet

It all started with Samye! The Great Lopön, Padmasambhava came to Tibet on the invitation of the Great King, Trisong Detsen under the guidance of the Great Abbot, Shantarakshita to built the first ever Buddhist monastery of the country.

When King Trisong Detsen, the thirty-eighth king of Tibet, was twenty-one years of age he formed a strong aspiration to spread the sacred teachings of the Dharma. He invited the Great Abbot Shantarakshita from India who helped lay the foundation of the great temple. Whatever was built during the day was dismantled at night by the local spirits creating many obstacles which eventually led the Abbot to make the prediction to invite the great master Padmasambhava to come to Tibet.

At the Tamarisk Forest at Red Rock, Padmakara met the king of Tibet and then proceeded to the top of Mount Hepori to bring the gods and demons of the country under his command. He laid the foundation for Samye and saw it through to completion, employing also the gods and demons who had earlier hindered the building. In five years the work was completed for the temple complex of Glorious Samye, the Unchanging and Spontaneously Accomplished Temple.

After the completion of Samye, the King requested empowerment and instruction from Padmakara. At Chimpu, the hermitage above Samye, the great master gave profound teachings to many destined students headed by the king and his sons and the twenty-five disciples.

Guru Rinpoche remained in Tibet for 55 years and six months; 48 years while the king was alive and seven years and six months afterwards. He arrived when the king was 21 (810 A.D.). The king passed away at the age of 69. Padmakara stayed for a few years after that before leaving for Ngayab Ling by liberating the king of the Rakshasas and assuming his form at the Glorious Copper Colored Mountain of Glory.

Below is an excerpt of the extraordinary teachings given by the Master to the King (from Advice from the Lotus Born, pp. 38-39).

To condense all into a single sentence: the view is to be free from convictions, meditation is to not place the mind on anything, experience is to be free from savoring the taste and fruition is beyond attainment. The Buddhas of the three times have not taught, are not teaching, and will not teach it to be any other than this!

Guru Rinpoche to the King:

The awakened mind of bodhicitta is not created through causes nor destroyed through circumstances. It is not made by ingenious Buddhas nor manufactured by clever sentient beings. It is originally present in you as your natural possession. When you recognize it through your master’s oral instructions, since mind is the forefather of the Buddhas, it is like the analogy of recognizing someone you already know.

What does it mean to ‘clear away the faults of conviction’?

What does it mean to ‘gain certainty’?

The Difference Between Mind and Wisdom

How to Meditate Properly

‘The Life of Guru Padmasambhava’ in A Great Treasure of Blessings, The Tertön Sogyal Trust, 2004.