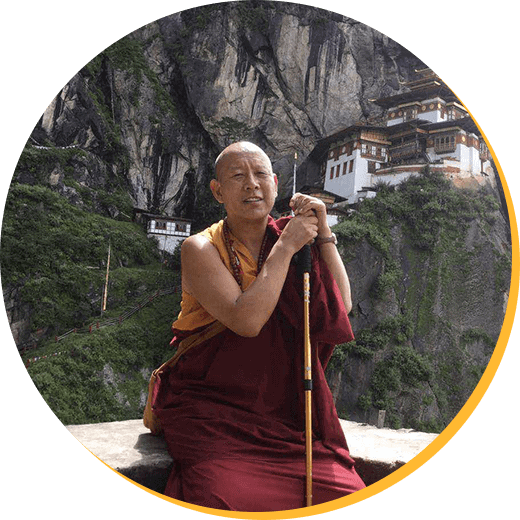 Drupla Opak is one of the senior monks at Ka-Nying Shedrub Ling Monastery, and has undergone the traditional three-year retreat twice at Asura Cave, Nepal. He received many instructions from Tulku Urgyen Rinpoche and has served the monastery as the main chant master and ritual master. Here, in his own words, Drupla describes his training.

I left Tibet in 1984, already with a wish to become a monk. First I went to India on pilgrimage, then came to Nepal in 1985. While on pilgrimage around Nepal’s holy sites, I came to Asura cave. It was there that I met Tulku Urgyen Rinpoche for the first time. I expressed my wish to become a monk. Tulku Urgyen approved my wish, and he told me to go to Boudha and meet Chokyi Nyima Rinpoche. So I went, and took the monk’s ordination from Chokyi Nyima Rinpoche at Ka-Nying Shedrub Ling monastery. I was 21 years old then.

At that time there was no shedra (monks college) at Ka-Nying. Monks only studied Tibetan language, and performed daily morning and afternoon pujas, and went out occasionally for house pujas. So we had to memorize the texts of those prayers and that was the only kind of study at that time. However there were already several knowledgeable Khenpos at the monastery. Sometimes they would give comments on some texts, but there were no regular classes like there are now.

My first responsibilities when I became a monk at the monastery began with pouring tea. After a time, I played gyaling  (woodwind trumpet) in the pujas. Later, after learning the shrine master’s art from Lama Putse Pema Tashi, I served as a chöpön (shrine master) for some time. Then for 2-3 years I was an umdze (chant master), and for 2 more years after that I served as a chötrinpa (disciplinarian).

These days I stay in KNSL monastery, taking part in the regular pujas. Over the last 5 years my main responsibility has been  to give ngöndro teachings during the annual 1-month ngöndro retreats organized by KNSL for the local (mainly Nepalese) sangha. Now many Nepalese participants from these group retreats continue to do ngöndro practices at their homes, and so I am also giving them advice when they have questions on their practice.

Also, following the command of Phakchok Rinpoche, we are preparing a new edition of the Chokling Tersar in Tibetan. I am checking and proofreading the pecha texts, correcting the mistakes.

I’ve been to Malaysia many times, sharing teachings on the Trinley Nyingpo and ngöndro practices. I have also traveled several times to Singapore and Thailand. I gave teachings on ngöndro in Bangkok. And I have visited Vietnam, Indonesia and Hong Kong, accompanying Phakchok Rinpoche (that time I went as Rinpoche’s attendant, not giving teachings myself). I have also taught the Trinley Nyingpo Sadhana Ritual course in Nepal for international students.

‘The Life of Guru Padmasambhava’ in A Great Treasure of Blessings, The Tertön Sogyal Trust, 2004.