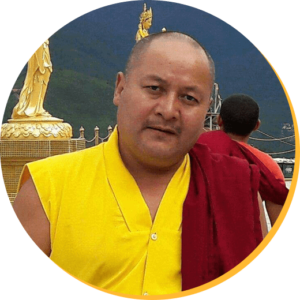 As a child, he enjoyed meeting lamas and listening to prayers such as Barche Lamsel and Sampa Lhundrupma.

When Sherab Dorje was 11 years old, he joined his parents to Kathmandu for pilgrimage. He met Tulku Ugyen Rinpoche and his wife Mayum-la, whom along with his parents, encouraged him to ordain as a monk and remain in Boudha at the Ka Nying Shedrub Ling Monastery. However, he returned to Nubri with his grandmother.

That year, he received letters from Tsoknyi Rinpoche, his 2nd cousin, encouraging him to join the monastery. When he was 12, he returned to Boudha to be ordained by Tulku Urgyen Rinpoche. He stayed at Ka Nying Monastery, performing jobs such as serving tea, helping cook, learning to play ritual instruments and making torma. He joined Tulku Urgyen Rinpoche whenever he went out for pujas. Gradually, he learned all of the monastic roles, eventually serving as Umdze (chant master) for 6 years.

He then completed a 3 year 3 month retreat at Asura Cave in Pharping, and has continued to do roughly 2 months retreat each year at the Punkyen Nang Retreat Cave, about four hours walk from Samagaon in Nupri. After accomplishing the retreat, he again served the monastery as Umdze for two more years.

For over 10 years, Drupla Sherab Dorje has taught all aspects of ritual practice to the younger monks at Ka-Nying Monastery, and has instructed Samye Institute’s Sadhana Ritual Courses for the past 6 years.