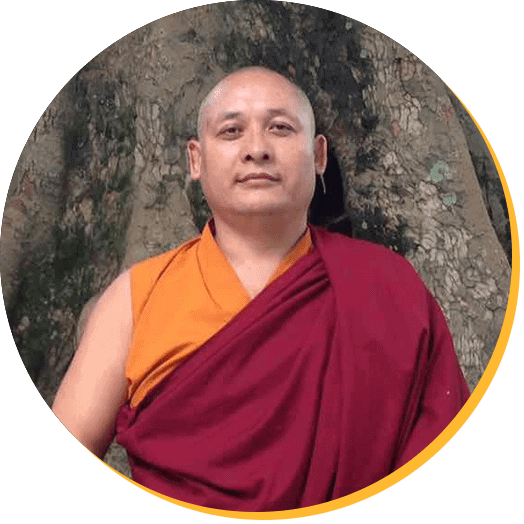 Khenpo Gyaltsen was born in Nepal on May 10, 1973. He is a direct descendant of the family of the illustrious Tibetan King Trisong Deutsen. At the age of nine, he entered Ka-Nying Shedrub Ling monastery, in Boudhanath, Nepal, established by Tulku Urgyen Rinpoche. There he studied philosophical and ritual texts until the age of twenty-five. During these years he received many initiations and transmissions from his principal guru, Tulku Urgyen Rinpoche. Notably, Khenpo received the precious “instructions on the mind.” Additionally, he received many texts and empowerments from Tsikey Chokling Rinpoche and Kyabje Chokyi Nyima Rinpoche.

Khenpo Gyaltsen traveled to India in 1997. There he studied the Buddhist tradition of logic for three years in the great Thekchen Choling. In 2000, he entered the Ngagyur Nyingma Institute where he completed his ninth and final year.  Thereafter, he received the Acharya degree from His Holiness the Dalai Lama. After graduation, he remained in India, continuing to teach for four years. In 2011, Karma Kuchen Rinpoche bestowed on him the title of Khenpo. This title is equivalent to a PhD in modern academic systems. In 2012, he returned to live and teach at Ka-nying Shedrub Ling monastery.

Khenpo Gyaltsen is a popular teacher at the Sangye Yeshe Monastic Shedra at Ka-Nying Monastery. International students also enjoy his philosophy classes at Rangjung Yeshe Institute, allied to the University of Kathmandu. Khenpo wrote an introductory volume on the Buddhadharma, A Lamp Illuminating the Path to Liberation, which Phakchok Rinpoche requested be translated into English by our translation team at Lhasey Lotsawa.