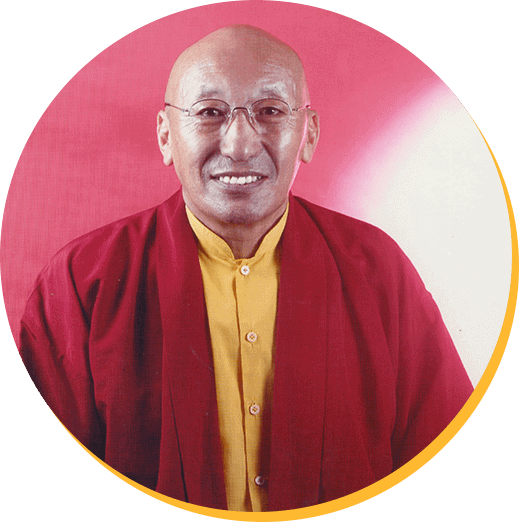 Kyabjé Khenpo (Kyabjé Khen Rinpoche Tashi Palden) was born in the Dergé kingdom in Eastern Tibet in the surroundings of Kyabjé monastery. At the age of seven Khenpo entered the monastery and at the age of nine he entered the monastery’s shedra (Buddhist university) where he excelled in his studies and became a Khenpo. During his early years he received a wealth of teachings and transmissions from Sötrul Rinpoche, the abbot of Kyabjé monastery, and later on from 11th Situ Rinpoche, 16th Karmapa, and Khyentse Chökyi Lodrö Rinpoche and many others.

When in Tibet, Khenpo made great effort to help preserve countless Buddhist texts, statues, dharma objects, and relics. When Khenpo traveled later on to India and Nepal, he met Kyabjé Tulku Urgyen Rinpoche and spent several years with him at his hermitage, Nagi Gonpa. He also met Kyabjé Dilgo Khyentse Rinpoche, Kyabjé Kalu Rinpoche, and 12th Situ Rinpoche and received many teachings and transmissions from them. Khenpo currently resides in Kathmandu.