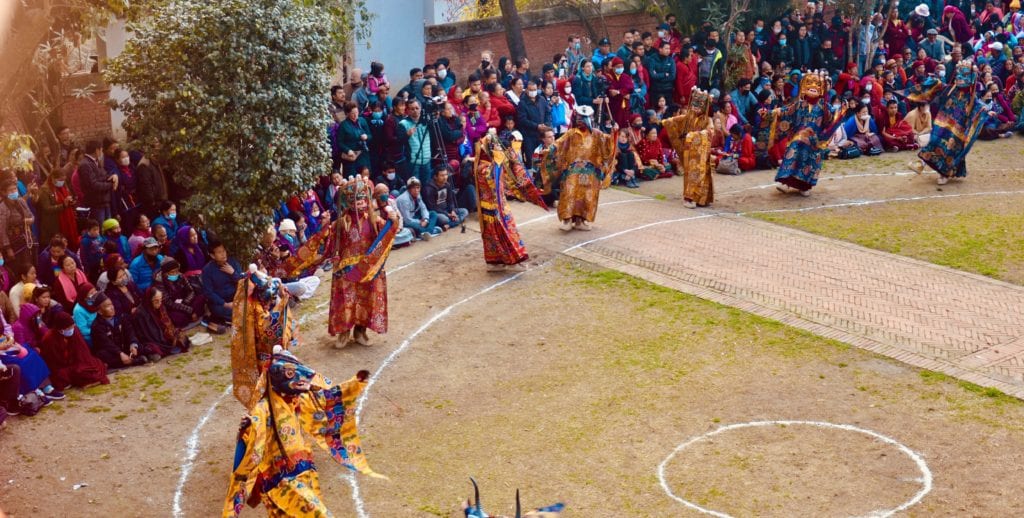 The Vajrakilaya Gutor puja is one of the annual pujas performed in Ka-Nying Gompa every year before Losar. Vajrakilaya, the wrathful emanation of Vajrasattva and embodiment Buddha’s enlightened activity, is considered the most powerful heruka for dispelling obstacles. For example, at the time when Guru Rinpoche was in retreat in Asura cave, in Pharping, Nepal, evil forces created terrible obstacles. There was no rain for three years, which caused famine, plagues, diseases, and chaos. Guru Rinpoche then sent two of his students to India to find one of his gurus, the vidyadhara Prabahasti, to seek his advice. These students found him and came back to Nepal with texts on Vajrakilaya. The mere presence of the texts in the land had an immediate effect, and when Guru Rinpoche invoked Vajrakilaya, all obstacles were eradicated![i]

This annual practice of Vajrakilaya in Ka-Nying Gompa was performed for seven days. The ritual masters set up a very impressive shrine! Besides the traditional torma, there was a 3D mandala of Vajrakilaya with his consort and the entire retinue of kilayas. There were also two big wrathful effigies that were used during the puja as a support for the practice. At the end of the puja, they were where all the obstacles were summoned and then burned and reduced to dust. Every day during the puja, from early morning to evening, all the lamas and monks, guided us through complicated rituals,  chanting and playing the musical instruments throughout the puja. In this practice, the beating of drums was performed more than in other pujas. And at a certain point, when reciting prayers to expel the obstacles, we also clapped our hands to scare them away.

In this puja we can see a variety of skillful methods of the Vajrayana that can be included in the ritual, such as chanting, mudras, playing musical instruments, recitation of mantras, creation of tormas and offerings, and the sacred dance called cham on the last day of the puja. All these combined are meant to create an experience of the environment as Vajrakilaya’s sacred realm. From day one to day six, a small group of lay practitioners joined the monks in the puja, and many more people joined on the seventh day. On that last day, we started the puja at two am. Lama Jinpa Gyatso explained to me that we had to start very early because we had to finish most of the rituals before ten am when the cham (known as “lama dance”) started. It was a challenge to wake up so early and to stay awake throughout the puja, even with the beating of the drums! But it was all worthwhile. The ritual dance was as profound as it was artistic. We all loved it! Every year hundreds of people would come to the monastery to watch the dance that goes on from ten am until around five pm. The climax of the event usually takes place at the end, with the “black hat dance” and the burning of the torma. Chokyi Nyima Rinpoche presided over the ceremony and Tulku Pasang Tsering performed as a very dignified and powerful Vajra Master. The monks danced intensely and beautifully. Everyone gathered and watched the performance with joy. At the end, we all shouted  “Victory!,” rejoiced, and wished that everyone’s obstacles were dispelled to create a good beginning of the new year.

[i] You can read more about this in Following in Your Footsteps. The Lotus-Born Guru in Nepal. Lhasey Lotsawa Translations. Rangjung Yeshe Publications: 2019.