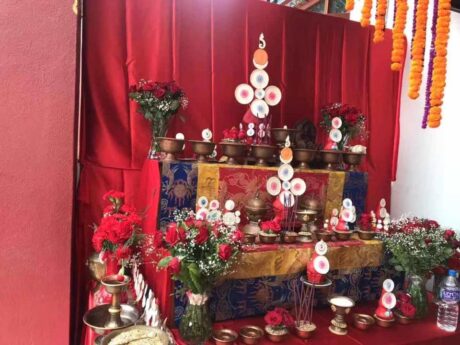 On the last day of the Kurukullé puja, the gathering of practitioners, the shrine and the offerings were set outside of the main temple.  Below a large Kurukullé thangka, chöpon Buchung, the ritual master, together with a couple of assistants set a splendid shrine with a red wooden image of Kurukullé and her retinue.  They added the traditional tormas needed for this particular practice, and a huge amount of red offerings of flowers, fruits and grains.

In front of the shrine, and in the middle of the gathering, they arranged a fireplace.  The logs, painted in red, were arranged in a structure that, when lit, created a fire so tall that it almost reached Kurukullé’s thangka above. 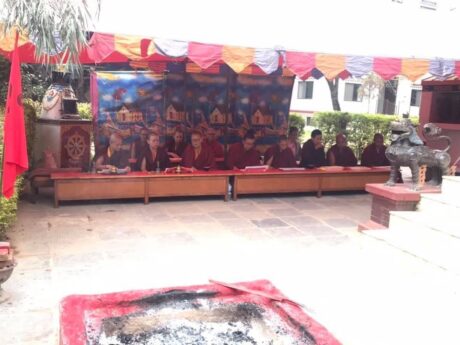 The rest of us sat behind them. Many people joined the puja on this last day in order to receive all the benefits accumulated during the previous days and to celebrate in this way a very special Dakini Day.

In the morning, we chanted the Kurukullé practice and recited her mantra.  We then took a break for lunch together at the monastery’s new diner located in the ground floor of the school.  During the break, a few of us visited the Vajra Varahi shrine, located right across the street from the monastery.  This shrine is a famous pilgrimage place, and is considered one of the five main Vajra Varahi shrines in Kathmandu. 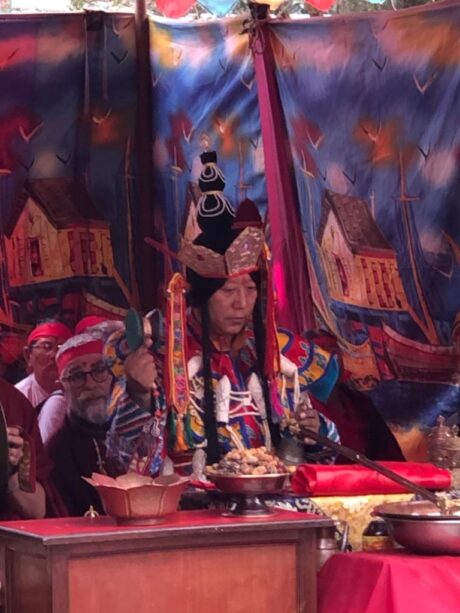 At one o’clock sharp, we all gathered again at the monastery and prepared for the fire puja.  Lama Öpak, who was the vajra master that day, wore a special dress for the ritual consisting of a brocade gown, bone ornaments, a three-bun black wig and the crown of the five buddha families.  Lama Öpak mentioned that the gown was akin to those wore by the Mongolian kings of the past.

The rest of us participating in the puja also dressed in special outfits.  Most of us wore red clothing for that day.  The ritual master put a red mark between our eyebrows and we all wore a red band covering our foreheads.  Everywhere we looked we would see red, the color associated with Kurukullé’s magnetizing activity.

For many hours, everyone in the ceremony chanted in unison invoking Kurukullé and her magnetizing qualities.  The offerings to the fire were nonstop.  The ritual master and his assistants would bring, one by one, hundreds of plates with offerings to the vajra master.  He would then bless them and give them back to the chöpons.  They in turn threw them into the fire using ritually significant gestures.  The chöpons would walk around the fireplace, clockwise.  And then, while facing the vajra master, they would carefully throw the offerings into the fire.

Every once in a while, the fire was fed with oil.  This was also done in a special way.  The chöpon would pour the oil carefully into long ritual instruments held by lama Öpak.  Lama-la would then pour the oil into another container that the chöpons would carry to the fireplace and feed to the fire.  After some time, the fire became tall and furious, and moved as if it were dancing.  The fire offering went on for a few hours until 6 pm.  We then closed the ceremony with a feast offering and received blessings from the wooden Kurukullé image.  It was an intense and joyful event!

At the end of the ceremony, Lama Jinpa Gyatso introduced me to Bharat Suwal, the artist of the impressive Kurukullé thangka that hung above the shrine.  This is the first time that I had ever seen a thangka like that.  It is a huge thangka made out of colored pieces of cloth sewn together.  An interesting and beautiful piece of art!  Lama-la told me that Bharat offered a similar thangka to his monastery in Patan.  When Phakchok Rinpoche saw it and expressed his appreciation, the artist immediately went to work on producing a second thangka and offered it to Rinpoche.  It was a wonderful offering, perfect for this puja!

This special day ended with another lovely encounter.  It is not so easy to find transportation from Chapagaon back to Boudha in the evening.  So a group of us got a ride back from Mun Ratna Sakya.  Mun Ratna is a Newari practitioner from Patan.  We learned that he was the son of Purna Kumari, the lady who had the idea to build the monastery where the puja took place!  Mun Ratna explained that his mother used to be a devoted disciple of Tulku Urgyen Rinpoche.  More than twenty years ago, she came up with the idea of building a monastery in Chapagaon, a place with great blessings from the Vajra Varahi shrine but without any Buddhist temple around.  She then told friends and family that they should get together and build a monastery there, which then they offered to Tulku Urgyen Rinpoche.

This monastery is now under the care of Kyabgön Phakchok Rinpoche.  Rinpoche is developing it as a flourishing center of study and practice of the Vajrayana.  Chapagaon gompa now houses 50 monks and is a vibrant spiritual center for local people and friends.

Definitely a place that I look forward to visiting more often! 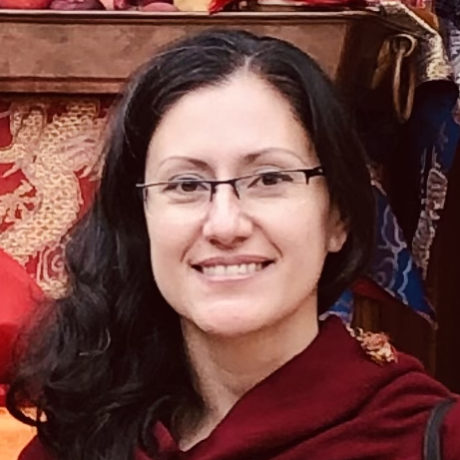 Marcela Lopez completed a degree in Psychology in 2004 and trained as a translator in 2007. She has studied and practiced Tibetan Buddhism since 2000, and in 2006 she met Phakchok Rinpoche, her main teacher. She lived in Nepal from 2011 until 2019, where she received teachings on Buddhist philosophy, Tibetan language and sadhana practice within the Chokling Tersar Tradition in Rangjung Yeshe Institute and in programs organized by Samye Institute. She continues her studies online.
All Posts