Prayer flags have now become very popular throughout the world. We may be curious about the origins of these colorful banners. What is their history and significance? In this excerpt from Khenpo Gyaltsen’s A Lamp Illuminating the Path to Liberation: An Explanation of Essential Topics for Dharma Students, Khenpo gives the following commentary:

Prayer Flags and Their Origins

According to oral tradition, what we now know as prayer flags were originally military banners. Others, however, say that they acted as landmarks. It is uncertain which of these explains how they later came to be a religious custom.

The Significance of Prayer Flags

Various astrological texts claim that, in general, the five colors of the flags (the squares of cloth in blue, white, red, green, and yellow) upon which sacred texts are traditionally printed symbolize the five elements. The astrology scriptures describe the elements as follows:

East is the wood element, south is fire,

West is iron, north is water,

And the four directions together are earth.

However, when arranging the colors of the prayer flags, most often they are arranged following the generic enumeration of the five elements, namely earth, water, fire, wind, and space. In this case, it is explained that blue symbolizes space, white symbolizes clouds, red symbolizes fire, green symbolizes water, and yellow symbolizes earth. 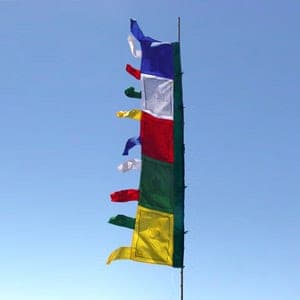 Pennons are the small strips (lit. silk tongues). Astrological texts clarify that a pennon of one’s elemental color should be placed on the very top. Below this, in descending order, are placed those pennons of the five colors that correspond to the astrological enemy figure of the previous pennon’s element.

The Benefits of Prayer Flags

Buddhism teaches that any being who is touched by wind that has blown through flags printed with mantras will never again be reborn in the lower realms. Also, in terms of worldly benefits, it is said that prayer flags avert all negative disharmonious factors, such as the 404 diseases of humans, diseases of animals, the 80,000 types of harmful spirits, the 21,000 kinds of accident, all negative conditions and obstacles, the 360 types of danger and so forth.

Prayer flags are thus an auspicious omen for the continued propagation of all harmonious factors, such as longevity, merit, power, fortune, fame, and reputation.

A Lamp Illuminating the Path to Liberation: An Explanation of Essential Topics for Dharma Students by Khenpo Gyaltsen (translated by Lhasey Lotsawa Translations, Nepal: 2014, pp. 144-146.

The Buddhist Wheel of Life