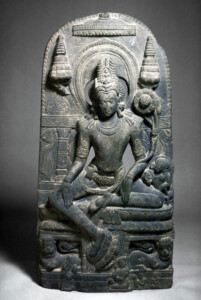 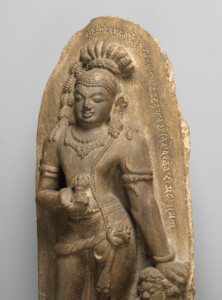 Lamrim Yeshe Nyingpo, The Gradual Path of the Wisdom Essence, by Guru Rinpoche, mentions four levels of heart-practice or guru sadhanas: the outer is Barché Künsel, the inner is Sampa Lhündrup, the secret is Tsokyé Nyingtik, and the innermost secret is Dorjé Draktsal. The terma or treasure root text states:

Jamgön Kongtrul, in his commentary on the above-quoted root verses of the Lamrim Yeshé Nyingpo, explains the significance of Guru Dorjé Draktsel as follows:

Most secretly, the supreme chief of vidyādharas, Powerful Vajra Wrath, Dorjé Drakpo Tsal, is the embodiment of all sugatas throughout directions and times, and the single secret accomplished yidam deity who has totally perfected the infinite mandalas displaying the great blazing herukas. Through this practice, and also through the nyegyü yogic practice connected with the “great accomplishment,” you realize the ultimate fruition of the five kāyas and wisdoms…

The essence of all the buddhas of the three times, the supreme sovereign of all power-wielding vidyadharas, the all-encompassing lord of the ocean of peaceful and wrathful yidams, the chief of the gatherings of all the dakas and dakinis, the great being who by his splendor outshines all the vajra protectors of the Dharma and the haughty forces of appearance and existence, is the one renowned throughout the infinite realms of the teachers of the three kayas as Mahaguru Padmasambhava. ༔

Invited by Manjushri’s incarnation, the Dharma King Trisong Deutsen, he came to this snowy land of Tibet, the realm of the noble Great Compassionate One. He placed all the vicious elemental forces under the majestic seal of his command, erected the triple-styled Unchanging and Spontaneously Perfected Temple, a palace with shrines, and strewed the flowers of consecration. He established the great tradition of expounding and practicing the entire doctrine of the Buddha and, in particular, he turned an infinite variety of the Dharma Wheels of the tantras, statements, and instructions of Vajrayana. ༔

He visited personally all the sacred places, the snow mountains, caves, and lakes, blessed them, and concealed innumerable named and unnamed treasures. Thus, his immeasurable kindness permeates all of Tibet, both the central and surrounding lands, and will remain a right up to the last day of the final future age. Samaya! ༔

At that time and occasion, the moment had come for the ripening of the result of perverted aspirations made through many lifetimes, showing itself as the hostile and evil-minded ministers and Queen Margyenma, engaging in various kinds of perverted thoughts and deeds. In the presence of the king they said: ༔

This sorcerer from the borderland of Mon has deceived you, the king, with all kinds of deceit, trickery, and optical illusions. At worst, he will deprive you of your life. Second to that, he will rob the kingdom. At the least, he will make the people revolt, spreading slander between the king, ministers, and queens. He should there­ fore be thrown in the river before the eyes of everyone. ༔

As they insisted in this way, the king became saddened and related in detail to Guru Rinpoche the story of what had happened. “What will you do about this?” he asked. Tears streamed from the king’s eyes and for a short while he fell unconscious from intense devotion. When he regained his senses after a few moments, Guru Rinpoche laughed and with a beaming smile said in the fearless voice of a roaring lion: ༔

Great king, you need not feel even slightly disheartened about this. Formerly, Mara and the heretics also tried to harm the truly perfected Buddha, but rather than causing even the smallest injury to the Three Jewels, they could only reveal his supreme enlightened virtues. Likewise, since I have attained mastery over the expression of awareness, I can transform the phenomenal world into whatever I desire. Since I have accomplished the indestructible form of the rainbow body, the four elements cannot inflict the least harm on me. Even if all the three realms were to rise up as an enemy toward me, the pandita of Uddiyana and the successor of all the victorious ones and bodhisattvas of the three times will only help in revealing my supreme miraculous powers, and surely not find any opportunity to cause me harm or even shake a tip of my hair. ༔

When Guru Rinpoche had spoken in this way, the great king felt deep devotion and rejoiced. He prostrated numerous times and made this supplication: ༔

How wonderful, nirmanakaya Guru! ༔
There is never any deception ༔
In whatever vajra words you utter, ༔
Since you are the embodiment of all the masters, ༔
The great lord encompassing the ocean of yidams, ༔
And the chief of the assemblies of dakinis. ༔

Please subdue the evil-minded ministers ༔
By the miraculous power of your compassion ༔
In order that we, your devoted disciples, ༔
May rejoice and be inspired, ༔
And that the precious doctrine ༔
Of the Buddha, Dharma, and Sangha may flourish. ༔

Since the king supplicated in this way, the guru joyfully promised, “I will do that!” And in the center of the nine regions of Tibet and Kham, in the courtyard of Golden Orphan Temple at Glorious Samye, he entered the samadhi that tames the hordes of Mara. ༔

During this time, in the middle of the great courtyard amidst his gathered retinue— panditas, translators, monks, mantrikas, the king, ministers, queens, and common subjects—the guru, while remaining seated, performed billions of unfathomable and miraculous displays to tame beings according to their needs, such as letting his body disappear, becoming a blazing fire, making the earth quake, manifesting peaceful and wrathful deities together with their assemblages, and filling the sky with the thunder like sounds of mantras. ༔

At this time, all the classes of maras were subdued and lost their power to inflict harm. The power of faith was fully established in both intermediate beings and nonbelievers. The faith of the believers was increased even further, and they yearned to drink the nectar of his words. All the people whose minds were ripened achieved the supreme siddhi of liberation, and the liberated ones attained the state of realization of Guru Rinpoche himself, in which the retinue is indivisible from the teacher. ༔

Because of these marvelous and inconceivable deeds, His Majesty the king felt even greater faith and devotion. In particular, at a time when Guru Rinpoche was staying in the Shining Turquoise Temple in the middle story of Samye, thinking of the future disciples in the age of degeneration, the king arranged upon a mandala plate of gold shining heaps of precious turquoise resembling huge and radiant stars. The king and the princes made numerous prostrations and, together with the incarnated translator Vairochana and myself, who was granted to be the spiritual consort, made this supplication: ༔

You are the fully perfected body, speech, mind, qualities, and activities ༔
Of all the buddhas and their sons of the ten directions and four times. ༔

Lotus Vajra body, untainted by a womb, ༔
Mahaguru, we prostrate at your feet. ༔

Protector, equal to all the buddhas, ༔
Your kindness toward the beings in the Land of Snow is exceedingly great. ༔

In particular, there exists for us, the gathering of king and subjects, ༔
No other crown jewel. ༔

Your special display of great miracles ༔
Has subdued the impure hordes of Mara. ༔

Raising the victory banner of the Buddha’s teachings throughout the ten directions, ༔
You have ripened and freed the fortunate ones and established them on the path of enlightenment. ༔

Your benefiting whoever is linked with you is an inconceivable wonder, ༔
So, our accumulations must be extremely great. ༔

However, when in the future the age of degenerations arrives, ༔
The side of virtue will be feeble and the evil forces raised high, ༔
With the violation-demons visibly possessing people’s hearts, ༔
Buddhism, the doctrine holders, ༔
And the happiness of sentient beings will be ravaged and destroyed, ༔
And the evil ages of plagues, famine, warfare, and conflict will therefore simultaneously well up. ༔

Since there will be no other refuge than you, the guru, ༔
When this ocean of misery overflows Tibet and Kham, ༔
We beg you to consider us with kindness ༔
And, for the sake of us and the disciples in the future, ༔
Bestow the quintessence of all the profound and vast instructions ༔
That temporarily subjugates the outer and inner maras, ༔
Effortlessly accomplishes the four activities, ༔
And ultimately is the method for attaining the bhumi of Unexcelled Wisdom, ༔
The light-body of the fivefold essence. ༔

When we had made this supplication, Guru Rinpoche manifested himself in an instant in the form of the vidyadhara Dorje Drakpo Tsal and bestowed all the empowerments and oral instructions. Following this, he displayed, in the manner of totally filling up dharmadhatu, the miracle of emanating and absorbing in a single moment infinite deities with retinues, the “approach” as the single mudra heruka, the manner with the elaborations of heads and arms of “full approach,” “accomplishment,” and “ great accomplishment.” Through the great splendor of blessings, he manifested everywhere throughout the central and surrounding areas of Tibet and Kham magical and miraculous displays of rainbows, lights, rains of flowers, earth tremors, spontaneous sounds and self-resounding music, and the vajra wisdom in actuality descending into the fortunate disciples. ༔

Once again, the Guru appeared majestically in the form of Padmasambhava, of the nature of light, and uttered with his vajra voice of dharmata this, the ultimate vajra speech, the stages of the path condensed to the essence. Samaya. ༔

In Clarifying the Aspects of the Auspicious Melody, Könchok Gyurmé Tenpé Gyaltsen, the second incarnation of Chokgyur Lingpa, shares how Chokgyur Dechen Lingpa revealed the Guru Draktsel Sadhana and the Lamrim Yeshé Nyingpo:

Chokgyur Dechen Lingpa first revealed the cycle of the secret sadhana Dorjé Drakpo Tsel, from the left side of the Secret Cave at Karmo Taktsang after having broken through thirteen consecutive seals. But, due to circumstances, it could not be written down in its entirety. Nevertheless, Chokgyur Dechen Lingpa succeeded in revealing the Lamrim Yeshe Nyingpo, which is superior to one hundred loads of terma teachings. As the extracted essence of the tantras, statements, and instructions, it is the background teaching for all terma treasures in general and for the Four Cycles of Guru Sadhana in particular. Padma Ösel Do-ngak Lingpa, Jamyang Khyentse Wangpo, decoded it from the yellow parchment and Chimé Tenyi Yungdrung Lingpa, Jamgön Kongtrul Lodrö Thayé, wrote a commentary upon it. Thus they established the tradition for expounding and studying this profound teaching, which will shatter samsaric existence by merely hearing its name, which causes unconditioned wakefulness to grow forth when one studies it and reflects upon it, and which bestows the fruition of buddhahood when applying it in practical experience. The commentary itself was also a terma teaching that arose from the expanse of sublime wisdom, and a normal person, no matter how learned, will not be able to write such a book.