Mañjuśrī /Manjushri is classified as one of the “eight close sons of the Buddha” and is the bodhisattva who embodies wisdom. 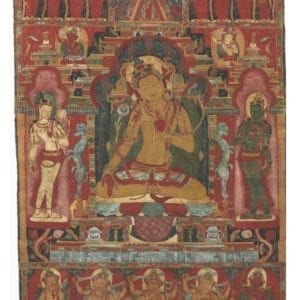 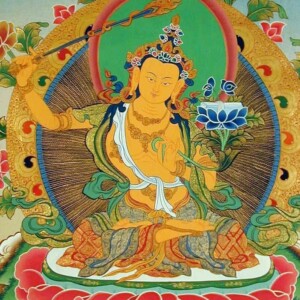 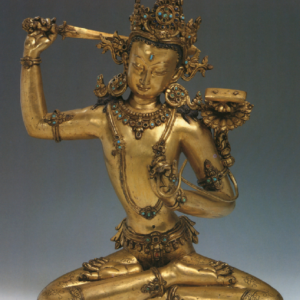 Mañjuśrī / Manjushri is classified as one of the “eight close sons of the Buddha” and is the bodhisattva who embodies wisdom. He has a number of epithets, usually concerning his “gentle” or “sweet” voice or as a “gentle youth”. The first references appear in Mahāyāna sūtras that were translated into Chinese as early as the second century CE. In these, he often acts as the bodhisattva who asks questions of the Buddha. In others, the Buddha encourages him to explain the profound meaning of emptiness to the audience. In the Saptaśatikā Prajñāpāramitā Sūtra, The Perfection of Wisdom in 700 lines, it is the bodhisattva Mañjuśrī’ who delivers the exposition of prajñāpāramitā.

His iconography varies, but in his most well-known form, he raises the sharp sword of insight in his right hand. In his left hand, he holds a stem of a flower, upon which rests a volume of the Prajñā­pāramitā­sūtra. He can appear in many colors, frequently as a white-green color, or a yellow-orange manifestation. In addition to the epithet Kumārabhūta, which means “having a youthful form,” Manjushri can also be referred to by the names Mañjughoṣa, Mañjusvara, and Pañcaśikha.

Mañjuśrī has been closely identified with Mount Wutai (Wu-t’ai) Shan in north China in both Indian and Chinese traditions. Classical Chinese scholars identified it as the north-eastern mountain associated with the bodhisattva according to the Avataṃsaka Sūtra. Pilgrimages to the abode of Mañjuśrī at the mountain have been documented from India and other Asian countries as early as the seventh century.

In Nepal, Mañjuśrī is associated with the origins of the Newar Buddhist civilization and the spread of Buddhism in Nepal. According to the legend of the Svayambhū Purāṇa, he was drawn by a mysterious underwater light to travel to the Kathmandu Valley from Mount Wutai. Enchanted at the sight, he drained the lake that filled the valley. With this swordstroke, devotees would be able to worship at the self-arisen stupa of Svayambhū. The place where his sword sliced through the surrounding hills is known as Chobar and is still visited by pilgrims today.

Because of his close association with wisdom, praise and supplications to obtain those qualities are often directed toward him. In Tibetan monastic shedras, classes often commence with the poetic praise known by its opening syllables, the “Gang gi lodröma”:

gang gi lodrö drib nyi trindral nyi tar namdak rabsalwé
Your wisdom is brilliant and pure like the sun, free from the clouds of the two obscurations.

jinyé dön kün jizhin zik chir nyi kyi tukkar lekbam dzin
You perceive the whole of reality, exactly as it is, and so hold the book of Transcendental Wisdom at your heart.

dro tsok kün la bu chik tar tsé yenlak drukchü yangden sung
With the love of a mother for her only child. Your enlightened speech, endowed with sixty melodious tones,

druk tar cher drok nyönmong nyi long lé kyi chak drok droldzé ching
Like the thundering roar of a dragon, awakens us from the sleep of destructive emotions and frees us from the chains of karma.

marik münsel dukngal nyugu jinyé chödzé raldri nam
Dispelling the darkness of ignorance, you wield the sword of wisdom to cut through all our suffering.

chu trak chu dang chunyi gyen tré dak lö münsel jampé yang la dü
Your body is adorned with the hundred and twelve marks of enlightenment. To Mañjughoṣa, the ‘Gentle-voiced’, I prostrate, and pray: dispel the darkness from my mind!

One of his most famous textual appearances is in the Vimalakīrti Nirdeśa Sūtra as the only bodhisattva who is bold and patient enough to deal with the rigorous debate of the layman Vimalakirti. In that text, the dialogue focuses on the profound meaning of emptiness.

Like other bodhisattvas, Mañjuśrī is said to have made many aspirations, including those describing his future pure land as Buddha Samantadarśin. In The Array of Virtues of Mañjuśrī’s Buddha Realm,  a sūtra that belongs to the Heap of Jewels (Skt. Ratnakūṭa; Tib. dkon brtsegs) section of the Kangyur, the Buddha commands Mañjuśrī  to recount some of those aspirations about his pure realm in the south called the Immaculate Accumulation of Perfection and Purity in Accordance with Aspiration. In his own words,  describes the aspirations made for this wondrous abode:

“Blessed One, I also aspired that my buddha realm will be filled with myriad trillions of precious jewels and adorned with myriad precious gems.  All the precious gems will be on display, and each of them will be rare, previously unknown, and unheard of in all the worlds of the ten directions. It would take billions of eons just to list their names. It is with such precious gems that my buddha realm will be filled. In my buddha realm, should the bodhisattvas come to think that they would like the buddha realm to be made of gold, they will perceive it as if made of gold. If others would like it to be made of silver, they will perceive it as if made of silver; and yet the former will still perceive it as if it is made of gold. Likewise, it can also become composed of beryl, crystal, red pearl, emerald, white coral, and various precious substances, as well as sandalwood, agaru, takara, mangosteen foliage, uraga sandalwood, or red sandalwood‍—whatever one wishes, it will be perceived in that way. Yet they will not perceive any of this as distinct buddha realms. In my buddha realm, the tree of awakening will emit light, and light will shine from each bodhisattva, such that all other sources of light and radiance will be eclipsed, including the light of the sun and moon, as well as the light of the stars, jewels, fire, lightning, and other beings. The extent to which this light pervades will be such that it will illuminate trillions of buddha realms. In my buddha realm, it will exclusively be the bodhisattvas’ wishes to enjoy things that determine whether the flowers there shall open or close, as well as what time or period of day it is.  Apart from that, not even the words day or night will exist. My buddha realm will have no hot or cold. There will be no aging, sickness, or death. All bodhisattvas in other worlds who desire to fully awaken to buddhahood, and those living in Tuṣita, will fully awaken to buddhahood once their lives are over. From the sky above my buddha realm, trillions of invisible instruments will unceasingly resound. Passionate music will not resound from these instruments. Rather, the instruments will resound with the sounds of the perfections, the sound of the Buddha, the sound of the Dharma, the sound of the Saṅgha, and the sound of the Dharma teachings of the bodhisattva basket. These bodhisattvas will hear whatever sounds they wish to hear. As soon as the wish to behold the buddha occurs to any bodhisattvas who wish to see the thus-gone one‍—whether they are walking, going, coming, sitting, or standing‍—they will see the thus-gone, worthy, and perfect Buddha Samantadarśin seated by the tree of awakening. As soon as they behold that blessed one, their doubt, uncertainty, indecision, and skepticism will be decimated. Without seeking teachings, they will seek the meaning of the words of the Dharma.”

Myriad trillions of bodhisattvas in the assembly then remarked with one voice, “The name Samantadarśin is highly fitting, for if any being who simply hears mention of the name of the blessed Thus-Gone One Samantadarśin obtains a great boon, then what need we say of one who is actually born in his buddha realm? Whoever hears this Dharma teaching as it is taught, or hears the name Mañjuśrī­kumārabhūta, will directly perceive the buddha.”

In the Vajrayyāna tradition, Mañjuśrī is a fully enlightened buddha. In the Chokling Tersar tradition, he is one of the three protectors of the Rigsum Nyingtik, The Heart Essence of the Enlightened Families, and represents the enlightened wisdom of all the buddhas.