Ritual dance performances occur on special days in the Tibetan calendar, particularly around the new year, and are an important way of transmitting the Dharma. When we witness a performance, we can observe how the lamas enact stories from the past with great care. Thus, we can learn to appreciate ritual dance as another skillful means within Vajrayana Buddhism. 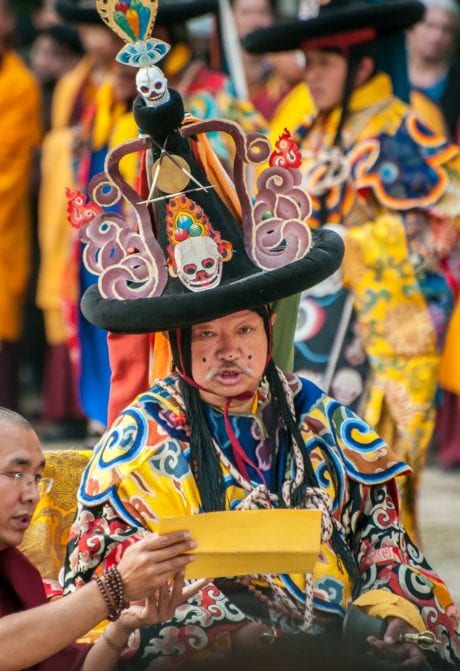 In this excerpt from Khenpo Gyaltsen’s A Lamp Illuminating the Path to Liberation: An Explanation of Essential Topics for Dharma Students, Khenpo gives the following commentary:

The Origins of Ritual Dance

In general, in the past in India when our teacher, Buddha Śākyamuni turned the dharma wheel of the secret mantra, when performing fire pūjā, or the throwing of Zor tormas, practitioners would don the attire of the peaceful and wrathful deities and perform ritual dances (cham), or vajra dances.  So this is a custom that was already present in India during Buddha’s time.

In Tibet, however, the first instance of ritual dance occurred when the dharma king Trisong Deutsen invited Acharya Padmasambhava and Abbot Śāntarakṣita from India and they built the glorious temple Samye Migyur Lhüngyi drubpé Tsuklhag Khang (The Immutable, Spontaneously Accomplished Temple that Surpasses Thought) and translated many secret mantra tantras into Tibetan. When Padmasambhava was consecrating the glorious temple of Samye, he performed the majestic vajra stance as described in the tantras. This was the very first instance of ritual dance in Tibet. Moreover, it seems that the tradition of vajra ritual dance spread and developed in Tibet from this point onwards.

These masks (zhal bag, literally meaning ‘likeness of a face’) are made in the likeness of the individual deities and worn by the dancers on their faces. 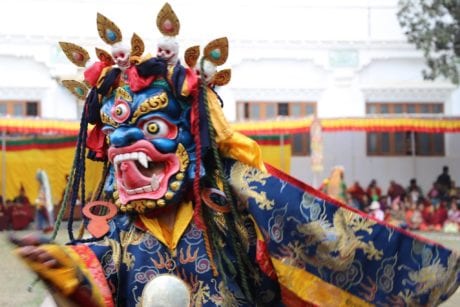 How the Dances are Performed

The dances are to be performed in their proper order in time with the musical instruments and the liturgies chanted with melodies. Regarding the actual dance movements, these differ from tradition to tradition. There is a wide variety of dance styles and different dance steps, such as drawing the right hand and leg in while extending the left hand and leg out and so on. For it is said that the dances are rooted in the pure visions of the accomplished siddhas of the various traditions from whom these dances then spread.

It is taught that when performing ritual dance, you should discard all notions of your ordinary self and assume the divine pride of the deity whose dance you are performing. 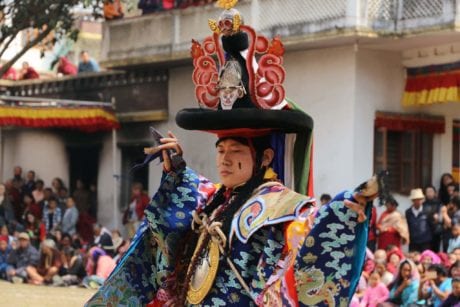 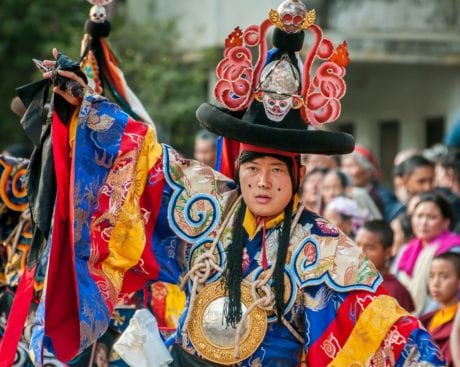 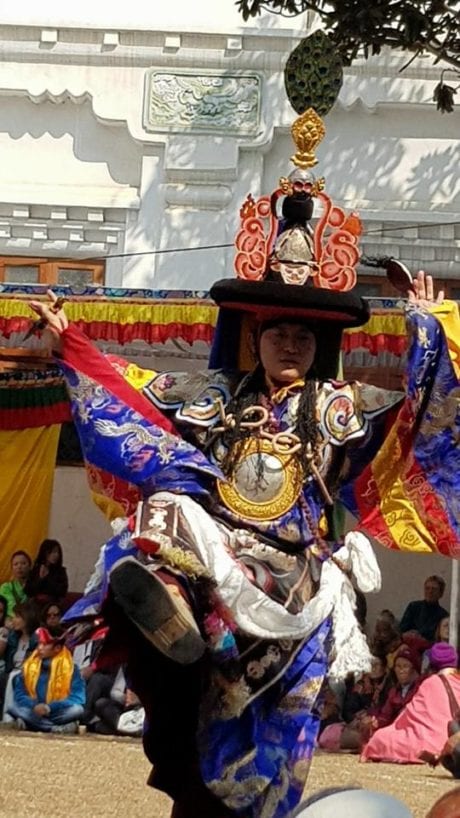 The Different Types of Ritual Dance

Regarding the different types of dances, the majority can be subsumed within three categories: peaceful, wrathful, and semi-peaceful and semi-wrathful. 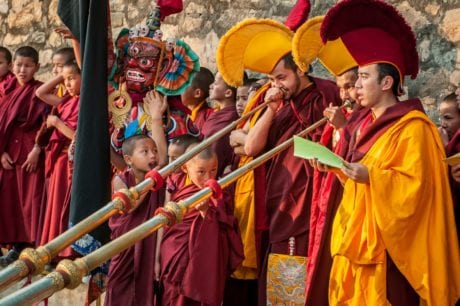 The main instruments played to accompany the dances are the cymbals and drum, the long horn, the gyaling (Tibetan oboe), kangling (short horn), the white conch, the hand drum, bell, the silnyen (another type of cymbal), and the damaru, amongst others. 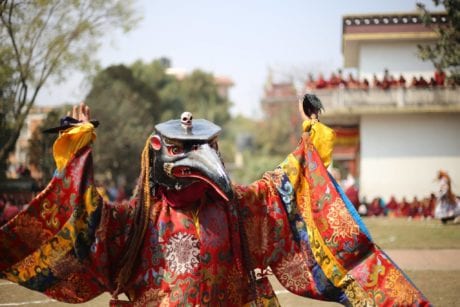 The colors vary according to the color of the deity being danced. For instance, they may be white, yellow, red, blue and so on corresponding to the color of the deity and whether they are peaceful, increasing, magnetizing, or wrathful. The colors of the costumes and the colors of the masks are usually the same or at least similar. Regarding the costumes, typically the upper garments are quite tight while the lower garments are loose.  In particular, the costumes for the Black Hat dance all have very wide sleeves. This goes back to when Lhalung Palgyi Dorje hid a bow and arrow in his sleeves when performing a dance and assassinated King Lang Darma. With all of its various details, this art of ritual dance is a wonderful and unique tradition.

The Benefits of Ritual Dance

It is said in The Secret Essence (Guhyagarbha) Tantra:

Vast cloudbanks of song, dance, And music radiate out.

Through the mudrā of song and dance,

The Blazing King is accomplished once and for all.

Through the mudrā of song and sound,

The supreme siddhis are attained.

Likewise, in the Lasso of Skillful Means Tantra it is explained:

You demonstrate fierce and mighty wrath,

You will leap forth from the three realms.

All states shall be accomplished.

Of this there is no doubt.

And in Yeshe Ngamlok it says:

If you hold the mudrās and the dance postures,

Bind with them and traverse through space,

You will be freed from the whole of saṃsāra

And even attain enlightenment.

That being so, what need to mention the other siddhis?

In Sangye Lingpa’s Gongpa Düpa, it is taught:

The dance postures, ritual dances, and their many poses

Should be performed in accord with one’s practice and following the texts.

Thereby, the blessings will descend, the mamos and ḍākinīs will be gathered,

And influence, wealth, and prosperity will increase.

Furthermore, in the tantras it says:

When one remains in these postures and stances

Infused with the samādhi of one’s deity,

Even the buddhas will be scared;

No need to mention the haughty spirits.

Thus, the benefits of performing ritual dances are stated clearly in many sūtras and tantras.   There are also countless benefits to watching ritual dances. When such ritual dances are being performed at monasteries on special days and occasions, you should go to watch them not for entertainment or fun, but with sincere faith, devotion, and pure perception viewing the dancers as the deities in person. If you do so, it is taught that your temporary and ultimate illnesses, negative influences, and obstacles will be appeased, and that you will enjoy good health, long life, and the fulfillment of your wishes and aims, together with many other benefits.

A Lamp Illuminating the Path to Liberation: An Explanation of Essential Topics for Dharma Students by Khenpo Gyaltsen (translated by Lhasey Lotsawa Translations, Nepal: 2014, pp. 156-161.