Jetsün Milarepa is one of the most famous yogis in the history of Tibet. His life story is an inspiration for laypeople and monastics alike. His namtar relates the story of a great sinner who attains enlightenment in one lifetime. Milarepa is considered one of the patriarchs of the Kagyü school of Tibetan Buddhism. 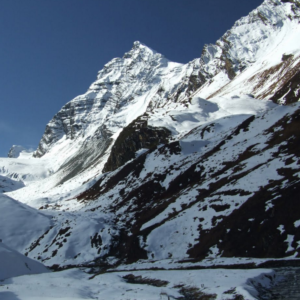 The exact dates of Milarepa’s life are uncertain as his Tibetan biographers give different information, but he was active in the 11th to 12th centuries. He was named Topaga, literally “delightful to hear,” a name that was well suited as he later became famous for his dohas, or spontaneous songs. He was said to have a  pleasing voice, so people loved to hear these songs. These songs were addressed specifically to the audience, ranging from yogis with years of training, to simple nomads and villagers, and to non-human beings. Many of these songs emphasize the importance of reliance on the guru, expressed through Milarepa’s words to his own guru, Marpa Lotsawa:

Seeing my father guru and hearing his speech,
This beggar’s depression dawns as a wondrous experience.
Remembering my guru’s life example,
From deep down, devotion and realization arose.
I truly received his compassion and blessings,
And nondharmic appearances, all of them, ceased.
My longing song of remembering the guru
Pained the ears of the Jetsün (Marpa), and yet
This beggar couldn’t help it; I would do it again.
Please continue to hold me with your compassion.

At the age of seven, his father, Mila Sherab Gyeltsen, died. Although his family was  wealthy, his father’s death left him and his mother, Nyangtsa Kargyen, without direct support. His aunt and uncle, who, by tradition, inherited the family wealth, forced them to work as servants for their own family.

Nyangtsa Kargyen was so bitter about this loss of fortune and status and the cruelty of her relatives that she sent her son to train in black magic in order to seek revenge. Milarepa at first enthusiastically followed his mother’s wishes and he trained in black magic with Nubchung Yonten Gyatso. He quickly mastered black magic. With his powers he caused the home of his aunt and uncle to collapse during a wedding feast they were hosting for their son. Although his aunt and uncle survived, thirty-five people, including other family members who were guests, perished.

According to the story, Milarepa’s mother rejoiced at this event but still felt scorned by the villagers and was not satisfied in her revenge. She begged Milarepa who began to feel great regret, to learn even more powerful magic so that he could send large hailstones to destroy the village crops. His teacher then sent him to another master, Yungton Trogyal, in order to learn how to bring hailstorms. He created a powerful hailstorm across his homeland, destroying the crops just as they were about to be harvested, and washing away much of the surrounding countryside.

Milarepa Turns Toward the Dharma

After a short period of time, Yungton and Milarepa began to feel great remorse over their actions. Aware of the extremely negative karma they had created, Yungton advised Milarepa, who was already regretful, to turn to the Dharma. Looking for a teacher, he first followed after the Nyingmapa Lama Rongton, who instructed him in the practice of Dzogchen. Because he was proud of his powers and due to his own karma, however, Milarepa did not make much progress and misinterpreted the meditation instructions he was given.

Lama Rongton observed that Milarepa needed a different method and saw that he had a karmic connection to the great translator Marpa Chokyi Lodro. He advised Milarepa to seek out Marpa in Lhodrak in southern Tibet. Marpa could see that Milarepa would become his foremost student but he also saw that his negative karma was heavy and he suffered remorse. According to Milarepa’s life stories, Marpa showed an angry temper to Milarepa and set him to a long series of physical challenges, plowing fields and famously building, then knocking down, and rebuilding four large stone towers. One nine-story tower still stands at the center of Sekhar Gutok. He refused to give his new student any teachings, pushing him to physical and mental exhaustion and testing his faith.

Eventually, Marpa revealed that Milarepa had been prophesied by his own guru, the Indian master Nāropa. He explained that the physical labors were necessary methods to  purify his earlier misdeeds.

Finally, Marpa saw that Milarepa had completed his purification and gave him the lay and bodhisattva vows, bestowing the name Dorje Gyeltsen. Over time, Marpa granted tantric instructions especially those of tummo or yogic heat, the instructions of tantric practice, and teachings on Mahāmudrā.  Marpa then gave Milarepa the secret initiation name Zhepa Dorje and instructed him to meditate for the rest of his life as a simple yogi in solitary mountain retreats. According to Milarepa’s own songs, he spent a total of six years and eight months with Marpa.

Milarepa returned to his homeland for a short period, stopping at his mother’s home to find that she had previously died, leaving her bones in a heap covered by rags. After cremating her body, he left the village for a nearby mountaintop to practice inner heat yoga. After a period, he resolved to wander and practice austerities in the mountains. He spent many years of intense meditation at Drakar Taso. According to stories, he ate nothing but wild nettles, turning his flesh green in color and leaving him weak in body. He often wore only a light cotton wrap, a “repa” even in the winter months, and was famously referred to as “the cotton-clad one.”

As a wandering yogi, he traveled across the Himalayan borderlands of southern Tibet and northern Nepal. Many of the locations mentioned in Tsangnyön Heruka’s life story of Milarepa later became important pilgrimage sites and retreat centers. Tsangnyön Heruka described these sites as “fortresses” of meditation. These form a sacred landscape along the southern border of Tibet. He described six famous outer fortresses, six unknown inner fortresses, and six secret fortresses as well as a number of caves said to be meditation abodes. According to the life story, Milarepa regularly tamed and converted demons and harmful spirits in these southern locations. Many of the locations where these conversions occurred were sites where the 8th-century master Padmasambhava previously meditated and tamed spirits.

Three famous sacred sites of southern and western Tibet – Tsāri, Labchi, and Kailāsa (Gang Ti-se or Mount Kailash) were either directly connected or prophesied by Milarepa. These three sites became renowned Kagyu retreat and pilgrimage centers. They were later associated with sacred pīṭhā (seats or benches) from the Cakrasaṃvara Tantra. As such, they are said to be the maṇḍalas of Cakrasaṃvara’s body, speech, and mind.

Following Marpa’s instructions, Milarepa spent much time in solitude and did not actively recruit students. However, his fame spread widely and many spiritual seekers sought him out. Common villagers had great reverence for his practice and invited him frequently to bless their settlements.

Thus he became well-known for his short and spontaneous songs and poetry. Although these songs were often short, they contained profound meaning. He often addressed both advanced students and benefactors on the importance of renunciation, non-grasping, and reflection on impermanence as in this verse from a song to his disciple Rechungpa:

When I look at the fortunes of the rich,
They appear to me like honey to the bees –
Hard work, serving only for others’ enjoyment,
Is the fruit of their labour.
When I think of this, my heart is filled with grief.
Rechungpa, do you not want to open
The treasury within your mind?
Oh, the more I think of this,
The more I aspire to Buddha and His Teachings.

To his meditation students, Milarepa taught the profound view of Mahāmudrā, explaining view, meditation, conduct, and fruition from the standpoint of the ultimate truth. His emphasis on the practice of meditation is underlined in a well-known story told about his last instruction to his student, Gampopa, before sending him off on retreat. Saying that he wished to impart one last instruction, as he was waving his student off, Milarepa turned around and showed Gampopa his callused naked buttocks. The practice of meditation without clinging, he demonstrated, still took hours of sitting.

The view is the wisdom of being empty
Meditation is luminosity without fixation
Conduct is a continual flow free of attachment
Fruition is nakedness bare of any stain.

Milarepa passed away at the age of 84. It is said that he ate poisoned curds given to him by the jealous geshe Tsakpuwa. After Milarepa’s body was cremated, ḍākinī goddesses are said to have carried away his corporeal relics. His disciples retained only a few possessions such as a piece of his robe, a lump of rock sugar, a knife and flint steel, and his songs of inner realization.