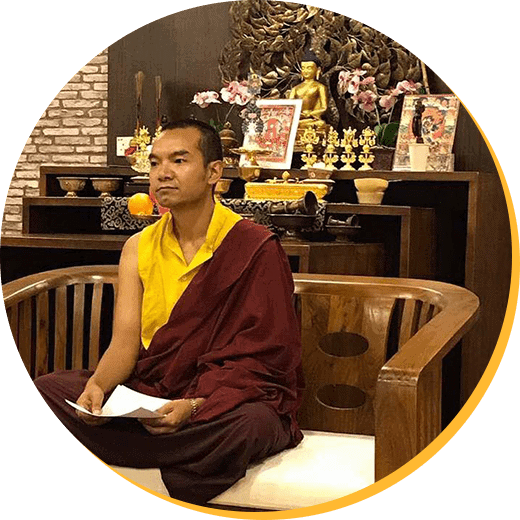 Drupla Sonam Tsering is one of the senior monks at Ka-Nying Shedrub Ling Monastery and has undergone the traditional three-year retreat three times. In his own words, Drupla describes his training here.

At age thirteen, in Nepal’s Ka-Nying Shedrub Ling Monastery, I received ordination from Chokling Rinpoche and Chökyi Nyima Rinpoche. I then began to study reading and writing, along with the memorization of sacred texts, and continued this for a number of years. Later, I also trained in the traditions of Buddhist rituals, learning to make offerings, play musical instruments, and conduct ceremonies.

While learning these things, I became aware of the uniqueness of Tulku Urgyen Rinpoche, who was both an advanced scholar and Buddhist practitioner. Understanding that it would be difficult to meet such a spiritual guide in the future, I entered a meditation retreat at age 22 for three years with the hope of receiving initiations, transmissions, and instructions from Tulku Urgyen Rinpoche. After completing this, I commenced, at age 27, studies in our monastery’s college, where I trained in the Buddhist scholastic tradition for four years.

Then, through the kindness of my gurus, the blessings of the Three Jewels and my understanding that I acquired from studies, I began to feel a strong desire to renounce worldly affairs and to lead a meaningful life. Having obtained the permission of Chokyi Nyima Rinpoche, I again entered a three-year meditation retreat.

Once I had finished my second long retreat, I began to work as a secretary in the monastery’s office, which I did for three years. At the same time, I also taught regular courses in translation at the Rangjung Yeshe Institute for a period of three years. I also frequently performed rituals for those who requested them, and I gave instructions on the Dharma to Nepali and foreign students.

Throughout this period, I felt an awareness of the impermanence of the world and a sense that my life may be going to waste. Once again, I requested permission of Chökyi Nyima Rinpoche to stay three years in retreat and began for a third time at age 40. After this retreat, Phakchok Rinpoche instructed me to help and instruct Buddhists in various centers in countries abroad. Happily having taken up this command, I am now engaged in teaching others the Dharma to the best of my knowledge and abilities.